Previously thought to be purely the preserve of proteins and peptides, scientists have discovered that the amino acid phenylalanine can form the toxic amyloid fibrils that are a hallmark of diseases such as Alzheimer’s and Parkinson’s. 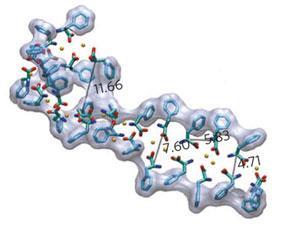 ‘This is the first time ever that it has been demonstrated that an amino acid, rather than a peptide or a protein, can form such a structure,’ lead researcher Ehud Gazit at Tel Aviv University in Israel tells Chemistry World. As well as throwing new light on the behaviour of amino acids, this work could lead to new treatments for the genetic disorder phenylketonuria (PKU), which is caused by high levels of phenylalanine.

PKU sufferers lack the enzyme phenylalanine hydroxylase, which breaks down phenylalanine. As a result, high levels of phenylalanine quickly build up in the blood, cerebrospinal fluid and brain, leading to seizures, organ damage and unusual posture. The disorder is particularly dangerous for children, because it retards brain development and can cause serious learning difficulties.

Fortunately, as we derive most of our phenylalanine from food and drink, PKU sufferers can control phenylalanine levels through their diet. This is why certain food products have the phrase ‘Contains a source of phenylalanine’ on their packaging; this is the case with many diet soft drinks, because phenylalanine is a component of the artificial sweetener aspartame.

Still, this is a fairly crude, and easily misjudged, way to control PKU, such that many teenage and adult sufferers have phenylalanine levels that are higher than would be ideal. A more effective method to control or even cure PKU is desperately needed. Unfortunately, the development of new treatments is hampered by the fact that scientists have struggled to elucidate the precise mechanism by which high phenylalanine levels result in organ and tissue damage.

Gazit suspected that the damage may be caused by phenylalanine forming amyloid fibrils. Most famously associated with Alzheimer’s disease, these ordered agglomerations of inappropriately folded proteins and peptides have been found to play a part in a wide variety of different diseases, including Parkinson’s disease, diabetes, atherosclerosis and rheumatoid arthritis.

Gazit’s suspicions were first raised by the fact that phenylalanine is an aromatic amino acid. He had previously shown that short aromatic peptide fragments can clump together to form amyloid-like fibrils and that a peptide consisting of two phenylalanine molecules can form nano-assemblies with amyloid-like structural properties.

So, together with colleagues, Gazit decided to investigate whether individual phenylalanine molecules could form amyloid-like fibrils, even though no amino acid was known to do this. His group used transmission electron microscopy and scanning electron microscopy to study high concentrations of phenylalanine in solution and found that phenylalanine did indeed spontaneously form amyloid-like fibrils. Exactly the same thing happened when he studied high concentrations in human serum.

Finally, using these fluorescent antibody probes, together with a dye known as Congo red that is regularly used to stain amyloid fibrils, the team searched for phenylalanine fibrils in biological samples. These samples came from brain tissue from a mouse genetically engineered to have a PKU-like condition and from human PKU sufferers. In both cases, Gazit's team unambiguously  detected phenylalanine fibrils. This provides convincing evidence that phenylalanine can form amyloid-like fibrils and that these fibrils are responsible for the tissue damage seen in PKU patients.

For Gazit, one of the most important aspects of this work is that it suggests that the antibody led approaches being developed to treat other amyloid diseases by targeting fibrils should also work with PKU. ‘Our further plan is to develop therapy and diagnosis for PKU based on the concept presented in the article,’ he says. ‘We are looking for a partner in the pharmaceutical industry to pursue this objective.’

One question the work raises, however, is whether any other amino acids could possibly form amyloid-like fibrils. ‘The behaviour is most likely due to the aromatic nature of the phenylalanine amino acid,’ explains Gazit. ‘Such behaviour might be observed with other aromatic amino acids, most notably tryptophan. Yet, [high] concentrations of tryptophan are not found in physiological or pathological states.’

‘This is a paradigm-shifting discovery,’ says Wilfredo Colón, a chemist who studies amyloid diseases at Rensselaer Polytechnic Institute in Troy, US, ‘because it shows that the presence of a peptide bond is not an absolute requirement for amyloid fibril formation.’ As the number of compounds known to form amyloid fibrils grows, he predicts they will be found to play a part in many more diseases.