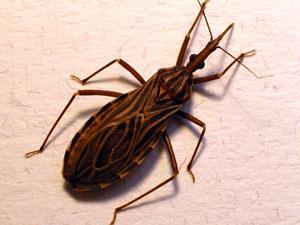 Scientists in the US and Spain have synthesised the combinations of sugars from the surface of the Chagas disease parasite that trigger the human immune response to it. This could help establish better diagnostic tests for the disease, and even a vaccine.

Chagas disease is caused by the parasite Trypanosoma cruzi. The parasite is transmitted by contaminated food, blood transfusions and blood sucking beetles commonly known as kissing bugs. After a phase of acute local infection, the disease becomes chronic and can eventually lead to life-threatening heart and digestive system disorders. Already endemic in Latin America, Chagas disease is also becoming more of a health issue in Europe and the US with blood banks now screening for it.

Currently, Chagas diagnosis involves spotting the parasite during microscopic investigation of blood samples or checking to see if antibodies in blood samples of infected patients bind to a lysate of Chagas parasites, but these tests are not very sensitive. As treatment is only effective at the acute stage of infection, better diagnostics are highly desirable.

The surface of the parasite is garnished with unusual sugars, but until now it has not been clear which ones elicit antibodies to the parasite. Sugar chemist Katja Michael and glycobiologist Igor Almeida from the University of Texas at El Paso and colleagues have synthesised combinations of a-galactose sugars from the Chagas parasites’ surface to solve the mystery. Sera of blood samples from infected patients were added to fluorescent immunoassays of the different sugar combinations. The assay revealed the disaccharide Gala(1,3)–Galß as the immunodominant glycotope on the parasite’s cell surface.

This information will aid the development of better diagnostics for Chagas disease and could even be used to develop a vaccine. ‘Mice immunised with certain sugars survived a lethal dose of the parasites for much longer,’ says Michael.

‘The immune response to Chagas is very complex – there are some infected patients without detectable antibodies, especially in the chronic phase of the disease,’ says Pedro do Brasil from the Institute of Clinical Chagas Research in Rio de Janeiro, Brazil. He says that vaccines against parasites are controversial and that there may be difficulties in studying their clinical effects.