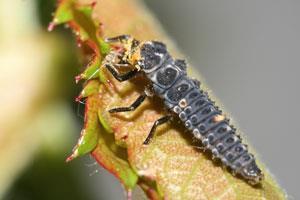 Ladybirds bite off more than they can chew if they try to feed on aphids armed with a chemical weapon based on mustard-oil, researchers at Imperial College London, UK, report.

The cabbage aphid (Brevicoryne brassicae) has hijacked the chemical defences used by its host plant to protect it against predation by other insects.   Cabbages and other brassicas contain glucosinolates, glucose derivatives containing sulfur and nitrogen that yield toxic secondary metabolites when the plant is eaten.

Aphids feeding on the plants have developed a mechanism for extracting and storing the glucosinolate sinigrin in their body fluid. When attacked by a ladybird, the compound comes into contact with myrosinase, an enzyme produced by the aphid and stored in muscle tissue. The enzyme catalyses the conversion of sinigrin into volatile isothiocyanates. The individual aphid is unlikely to survive the trauma, but neither will the ladybird, so the aphid colony will be protected.

Allyl isothiocyanate is the major ingredient of mustard oil, giving the characteristic pungent flavour found in mustard, horseradish and wasabi. Synthetic versions are used to denature alcohol and as an antiseptic but the compound also has strong antifungal and insecticidal properties.

Aphid diet can kill off ladybirds

When ladybird larvae were fed on a diet of aphids rich in sinigrin they failed to survive to adulthood, a team from the college’s Wye campus report in the Proceedings of the Royal Society B. But the larval predator thrived when fed aphids reared on an artificial diet containing no sinigrin.

Aphids live through most of the summer months in a flightless form but develop wings to allow dispersal in periods of cooler weather. The metabolic costs of producing the equipment and fuel necessary for flight mean that the insect has to switch off its chemical defences and ladybirds will feast enthusiastically on the winged version, explained Glen Powell senior lecturer in biology at Imperial and a co-author of the paper.

The particular aphid species used in the study is a major economic pest worldwide, causing significant damage to cabbage and related crops such as oil seed rape - both by consuming the plant and spreading viral diseases. So it is fortunate that not all the insect predators controlling its numbers are susceptible to the ’mustard oil bomb’.

’In our experiments we used the two-spot ladybird which is a generalist species that isn’t commonly found feeding on the cabbage aphid, for obvious reasons. But there is another ladybird, the seven-spot, that will often be found feeding on this species and appears to have developed a mechanism for detoxifying these chemical defences,’ Powell said.

Cambridge University entomologist William Foster said the study was interesting in highlighting how unusual this sort of defence mechanism is in aphids. Wingless aphids reproduce asexually by parthenogenesis. Each offspring is genetically identical to their mother and so the aphids feeding on a particular plant are effectively a clone. Evolutionary theory suggests that self sacrificing behaviour that protects kin members should be common in groups like aphids - ’what is surprising is that it is actually rather rare,’ Foster notes.