Bacteria that photosynthesise using compounds of arsenic, rather than water, have been discovered in Mono Lake, California.

Researchers from the US Geological Survey, led by Ronald Oremland, found the microbes thriving in the lake’s hot springs - which are alkaline, salty, oxygen-depleted, and contain high concentrations of both arsenites (AsO33-) and arsenates (AsO43-). 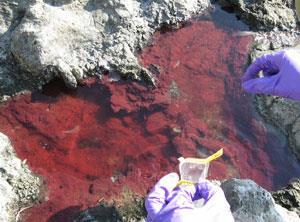 One of the sample pools at Mono Lake, California, with arsenic-fueled bacteria.

The scientists took the bacteria back to the laboratory, and found they were extracting electrons from arsenite by photosynthetic oxidation, in order to help convert CO2 to biomass. Green plants, by contrast, use water as their electron supply in photosynthesis. After splitting water, conventional photosynthesis emits oxygen; the Mono Lake microbes produced arsenate species instead.

Other bacteria have been found that photosynthesise using sulfur and iron compounds - and these, together with the arsenite microbes, probably evolved before conventional oxygen-producing photosynthesis arose around 2.7 billion years ago.

Bacteria that generate energy by metabolising (reducing) arsenate compounds are already known. It’s likely that the newly-discovered arsenite photosynthesis, which produces arsenates, opened up niches for these microbes, the researchers suggest.