Australia has unveiled a global institute to help develop flagship carbon capture and storage (CCS) projects around the world.

As Chemistry World   went to press, the institute - supported in part by an annual Aus$100 million (?47 million) contribution from the Australian government - was expected to launch on 2 February. 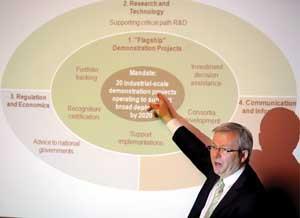 Countries that have already signed up include the UK and Norway, with industry founding members including Alstom, Shell, Anglo American, Mitsubishi, and Rio Tinto.

Details of funding and how the institute will operate are still being finalised, but it will focus on facilitating demonstration projects. It is to be headed by Nick Otter, Alstom’s director of technology and external affairs.

A number of other CCS networks already exist (such as the European zero emissions platform), so communication will be key to avoid overlap, says Tore Andreas Torp, adviser on CO2 storage at Norwegian oil and gas company Statoil.

The institute will need the buy-in of the G8 and other countries, adds Peter Cook, chief executive of the Australia/New Zealand based Cooperative Research Centre for Greenhouse Gas Technologies, CO2CRC. ’It will only be used if it has real credibility, so it has to get some runs on the board in terms of some large scale projects,’ he says. The G8 has set a target of 20 commercial scale projects by 2020. ’I think this is entirely realistic. In fact it is a very cautious target compared to what we need to do,’ says Cook.

Australia has also committed to a 2020 target to reduce greenhouse gas emissions by 5 per cent on 2000 levels (potentially increasing to a 15 per cent cut). The country’s primary tool to meet these targets is the Carbon Pollution Reduction Scheme, an emissions trading scheme covering 75 per cent of emissions, that will start in July 2010.