E. coli bacteria have been engineered to produce precursors of one of the most widely used cancer drugs

Researchers have engineered bacteria to produce precursors of Taxol (paclitaxel), one of the most widely used cancer drugs. The work could lead to quicker and cheaper synthetic routes to Taxol, and could improve commercial access to terpenoids used in food, cosmetic and chemical products.

The researchers from Massachusetts Institute of Technology (MIT) and Tufts University in Boston, US, broke down the synthesis into two parts. First, they amplified four bacterial genes in Escherichia coli to increase production of isopentenyl pyrophosphate (IPP), a building block of an important Taxol precursor, taxadiene. They then inserted two plant genes to convert the IPP to taxadiene, achieving 1g per litre in the fermentation mixture. In previous attempts using E. coli, scientists achieved only 1.3mg per litre of taxadiene. Furthermore, the researchers also produced for the first time in E. coli taxadien-5alpha-ol, the next compound on the route to Taxol.

Taxol is made naturally by the Pacific yew tree, Taxus Brevifolia. In the early years, production relied on the tree as a feedstock, which devastated the population - between two and four trees were needed to produce enough of the drug to treat one patient. But in the 1990s, several scientists developed synthetic approaches. US pharmaceutical firm Bristol-Myers Squibb brought Taxol to market in 1992 and it quickly became a first-line treatment for a range of cancer types. Sales reached $1.6 billion (?1 billion) in 2000. Since then generic versions have reduced the price of Taxol but the drug remains expensive. 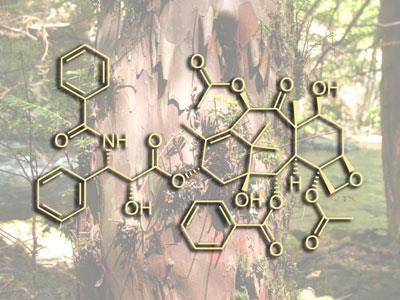 E. coli could now be used to make paclitaxel, a widely used cancer drug originally isolated from the bark of the Pacific yew tree

Now it could be possible to get E. coli to do the hard work. The key, the researchers say, was metabolic engineering: careful balancing of the effects of the numerous genes. ’By mimicking nature, we can now begin to produce these intermediates that the plant makes, so people can look at them and see if they have any therapeutic properties,’ says author Gregory Stephanopoulos.

’This is a remarkable study,’ says Lai-Xi Wang, a molecular biologist at the University of Maryland School of Medicine, US. ’The combined modular engineering approach, which enables the balancing of multiple metabolic reactions simultaneously for the production of the key Taxol precursor, may be generally applicable for other targets.’

Tom Ellis, a synthetic biologist at Imperial College London, UK, says: ’The use of a modular, focused, combinatorial method of engineering enzymatic pathways pays off handsomely, giving massive improvements in yields without needing high throughput screening.’ He adds that cheap bacterial synthesis is likely to establish itself as an economically viable way to produce diverse and complex plant molecule drugs like Taxol.