BASF are using directed mutagenesis to tweak plants' own genes

German chemical giant BASF has applied directed mutagenesis to develop crop plants that are tolerant to specific pesticides. Unlike traditional genetic modification methods, which introduce genes from foreign species, directed mutagenesis alters the genetic makeup of the plant through the natural process of gene repair - and so is less likely to meet resistance from regulators and environmental groups.

Working in collaboration with Cibus, a plant trait development company based in San Diego, BASF has used directed mutagenesis to develop Brassica winter rapeseed and spring canola plants that are resistant to BASF’s ’Clearfield’ herbicides. 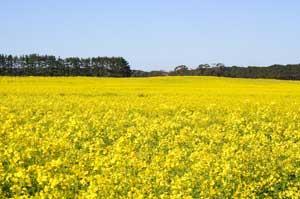 Guru Rao, a directed mutagenesis expert and chairman of the Department of Biochemistry, Biophysics and Molecular Biology at Iowa State University in Ames, Iowa, says that the major disadvantage of transforming an organism, plant or animal, with genetic modification is that ’one has little or no control over where the gene gets incorporated in the genome of the host. Thus, the gene may be inserted in a region of the DNA that affects other functions.’

But directed mutagenesis ’allows one to make precise changes in the DNA sequence of the native gene that alters its function to achieve the desired trait, [and is capable of introducing any trait] as long as one knows the target gene associated with the particular trait of interest,’ says Rao.

Rao believes that although the foreign genes in GM crops can confer beneficial properties, they also can introduce concomitant undesirable and unpredictable properties, saying that: ’targeted [directed] mutagenesis technology is exciting and offers the best path forward.’

Alexander Hissting, agricultural expert for Greenpeace Germany, which is vehemently opposed to GM crops, says the organisation is not opposed to plants developed using directed mutagenesis, but will not promote it. ’It is not going in the direction we favour for sustainable agriculture, [we believe] the future of agriculture is not industrial agriculture, but local, small-scale agriculture,’ he says.