A drug delivery plaster mimicking the wet adhesion of beetle feet has been developed by scientists in Taiwan. The micropillar patch sticks to test surfaces via van der Waals and capillary forces, and releases anti-inflammatory drugs in a controlled manner.

Transdermal administration of drugs by patches reduces side effects, stomach irritation and drug metabolism. It is also more convenient and better at maintaining consistent drug levels in the body than oral or intravenous administration. 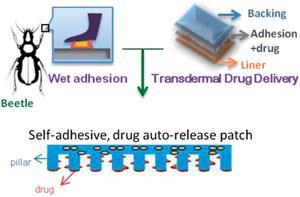 Drug delivery patches are sometimes used to treat Parkinson’s disease and hyperactivity. Nicotine patches to help people quit smoking are widely available. Drugs are released from a reservoir on patches stuck to the skin with adhesive chemicals. However, skin may be irritated by these adhesive formulations and cannot breathe. Drug release rates can also be difficult to control.

Chen-Yi Tsai and Cheng-Chung Chang from the National Chung Hsing University in Taichung have developed a self-adhesive patch with a capillary structure mimicking the wet adhesion of beetle feet. ‘We imagined that if the secretions from capillaries on beetle feet were replaced with liquid drugs, a self-adhesive, auto-drug delivery patch would be achieved,’ says Chang. The patch uses biocompatible silicone materials, is breathable and reusable. It shows strong adhesion properties but is still easy to remove, and releases different anti-inflammatory drugs from the patch’s capillaries quantitatively and uniformly for several days.

Tsai and Chang plan to test the patch on skin next. In the future, they also hope to develop patches for birth control and burns treatment.