Researchers have developed an enzyme that can produce a difficult to form chiral amine in a best-selling diabetes therapy. While the synthesis of chiral alcohols is often accomplished using biocatalysts, finding suitable systems for the production of chiral amines has, up to now, proved somewhat elusive.

Scientists at pharmaceutical firm Merck & Co. and biocatalyst company Codexis looked at using a biocatalyst in the manufacturing process for Merck’s top-selling diabetes drug Januvia (sitagliptin), which had 2009 sales of $1.9 billion (?1.3 billion). Compared with the rhodium catalyst currently used, the enzyme they developed led to a 10-13 per cent increase in yield, a 53 per cent increase in productivity, a 19 per cent reduction in solid waste and the elimination of all heavy metals from the synthesis. Using the enzyme could also reduce manufacturing costs, and removes the need for specialised high pressure hydrogenation equipment.

The use of traditional transition-metal catalysis for drug production can often present problems. In this case, the rhodium catalyst suffers from poor stereoselectivity and introduces rhodium into the product stream which means additional purification steps are needed later on.

Naturally-occurring transaminases showed little or no activity towards the target ketone due to steric interference around the group. To overcome this, the scientists used a ’substrate walking’ approach to gradually open up the binding site using a range of standard techniques, such as direct evolution. Instead of using the target substrate from the outset, the scientists used a series of proxy substrates during the enzyme evolution process which were catalysed much more readily. Each substrate was more like the target substrate than the last so that the enzyme was gradually ’walked’ towards the desired activity. 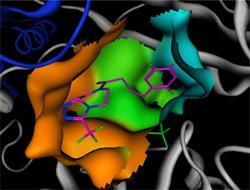 The researchers engineered the enzyme to target the desired substrate

Scientists in industry - as well as academia - are now embracing directed evolution as a way of optimising biocatalysts, says Nicholas Turner, director of the Centre of Excellence in Biocatalysis at the University of Manchester, UK. ’The ability to improve enzymes [using substrate walking] so that they are fit-for-purpose will undoubtedly lead to greater uptake of biocatalysis by the pharma and fine chemical industries,’ he says.

In the sitagliptin synthesis, only one of two ketones in the substrate is aminated by the enzyme, which gives the product with an enantiomeric excess of over 99.95 per cent.

John Ward, professor of molecular microbiology at University College London, UK, says that the resilience to harsh reaction conditions and high stereoselectivity ’brings the new mutant enzyme easily into the realm of intensive chemical reaction processes’. He adds that more high-quality x-ray crystal structures might help researchers to make better use of the many naturally-occurring transaminases that could provide starting points for development.