Bolivia’s decision to develop commercial-scale lithium mining by 2014 is good news for the emerging electric car industry and lithium battery producers, but exactly how the South American nation, one of the world’s poorest, will accomplish the ambitious goal is still uncertain.

Yaron Vorona, executive director of the Washington, D.C.-based International Lithium Alliance, whose members include producers and users, told Chemistry World that if Bolivia successfully develops a lithium mining industry, it would drive additional investment into lithium end-use research and development.

’Any potential new lithium supply is very good news for the future of lithium using industries, as it reduces dependence on a single source and increases resource security,’ he says.

Bolivia, which currently does not mine lithium, had been in talks with foreign firms to mine the metal at the Uyuni salt lake, a 4,000-square-mile expanse in south-western Bolivia 12,000 feet above sea level. However, after mining firms declined to participate in a scheme to develop a lithium battery industry in Bolivia, the nation announced in late October it would invest $500 million (?302 million) in a state-owned mining operation. 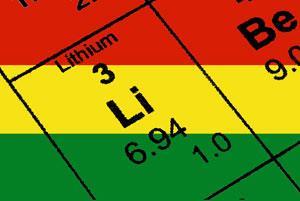 Bolivia plans to build its own ’lithium economy’

Vorona says Bolivia wants to vertically integrate the lithium market so it can import technological know-how and claim a larger portion of value-added profits. ’There are a few problems with this plan,’ he says, one of which is that ’it is seen as extremely risky for potential international investors.’ In the past, President Evo Morales has nationalised natural resources and industries, expropriating foreign investments.

Estimates of global lithium reserves vary widely. The US Geological Survey (USGS) pegs Bolivian lithium reserves at 5.4 million tones, the largest in the world followed by Chile, at 3.0 million, and China at 1.1 million, with total reserves of 11 million. But Vorona says other experts believe reserves are much higher as ’the USGS figure is far more restricted in scope and is more conservative, but ignores a great deal of future potential.’ He notes that Bolivia’s reserves have been predicted to be as large as 8.9 million tonnes and world reserves to be 39 million tonnes.

In 2008, total lithium production was only 27,400 tonnes, with Chile accounting for 44 per cent of total production, followed by Australia at 25 per cent, China 13 per cent, and Argentina 12 per cent, Vorona says. He adds that some 25 per cent of the total was used for batteries, a demand that is likely to increase significantly over the next 10 to 20 years, as electric vehicle penetration increases to perhaps 10 per cent to 30 per cent of all cars sold.

’In the long run, transportation will be largely electric,’ he says. ’The only losers will be Opec (Organisation of petroleum exporting countries) - but if Opec loses, everyone else in the world wins.’