A bone-repairing nanoparticle paste has been developed that promises faster repair of fractures and breakages. DNA containing two growth-factor genes is encapsulated inside synthetic calcium-phosphate nanoparticles. These genes can enter cells and induce the synthesis of proteins that are able to accelerate bone growth.

The treatment of bone loss or fracture – after trauma, surgery or tumour extractions, for instance – represents a major challenge in clinical medicine. Matthias Epple at the University of Duisburg-Essen, Germany, who leads the team that developed the new bone paste, explains that ‘alternatives, such as bone from donors and synthetic calcium phosphate, suffer from infection problems, poor mechanical stability or inadequate resorption to form new bone.’ The team’s approach combines the bone-forming action of calcium phosphate – the principal component of bone – at the site of injection with further stimulation of bone growth in the surrounding tissue. 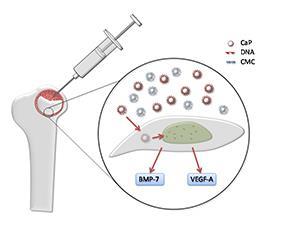 Genes for two growth factors are encapsulated within the nanoparticles: bone morphogenetic protein 7 (BMP-7), which stimulates bone-forming cells, and vascular endothelial growth factor (VEGF), which induces the growth of blood vessels for bone-cell nutrition. Following injection, the nanoparticles are taken up by the surrounding cells, where the acidic conditions of the lysosomes dissolves the calcium phosphate and releases the DNA. These transfected cells then produce the growth factors that accelerate bone growth and reduce the amount of time a patient is immobile. Epple expects a long-lasting stimulatory effect that will aid growth over the months and years required for bones to heal fully, preventing the need for multiple injections.

Michael Hofmann, who works on bone cements and drug delivery at the University of Birmingham, UK, remarks: ‘The bioresorbable paste would be replaced quickly by newly formed bone, so effectively you would have a vanishing implant. In a population where an increasing number of people have impaired bone-growth abilities – for instance, the elderly – the findings have tremendous potential for accelerating the regrowth of any bone loss or fracture in orthopaedic and dental applications.’

Epple’s team plan to extend their work on calcium-phosphate nanoparticles to target specific cell types by attaching antibodies to the nanoparticle surface.