After almost a decade of rising spending on science in Brazil, it seems that the winds have changed. Last month, the government announced a 22% reduction in the science budget for 2012. This meant that money for science fell by a third to BRL6.7 billion (?2.37 billion), compared with 2010.

The reduction was part of a government programme of budgetary cuts to reduce spending by BRL55 billion. According to the Ministry of Finance, the cut will help the country to secure a surplus of BRL140 billion and is part of preventative measures to insulate Brazil from the international financial crisis. 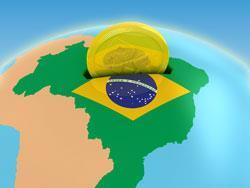 The Brazilian government is saving money to pay off its debt, rather than increasing its investment in science

This is the second funding cut to hit Brazil’s science and technology base, since president Dilma Roussef came to power in 2011. By contrast, during the presidency of Luiz In?cio Lula da Silva, science was considered a high priority.

Between 2003 and 2010, both the number of places for students in public universities and research fellowships doubled. Funding for science also increased substantially from 1.26% of GDP to 1.56%. As a result of this investment, Brazil now produces 55% of the journal papers written in Latin America. A goal of 2% of GDP going to science and technology was then set for this decade.

The Brazilian Society for the Advancement of Science released a letter decrying the decision to slash the budget arguing that ’it is a strategic area that has been undermined’. The president of the society, Helena Nader, said in the letter: ’The most developed nations invest in science and technology aiming to widening their knowledge base and increasing the potential for innovation, in order to generate more jobs and better distribution of income.’

Meanwhile, the Brazilian Academy of Sciences has also expressed concern. ’The two cuts represent a big backward step with respect to president Lula’s government’s policy,’ says Luiz Davidovich, director of the academy. ’If such cuts are not reverted, research activities will be seriously damaged; support for innovation will be also significantly diminished, damaging the most modern part of the Brazilian economy.’

Vanderlan da Silva Bolzani, former president of the Brazilian Society of Chemistry and a member of the board of the society, says that the natural sciences, including chemistry, will be hit hardest by the funding cuts. ’High level research in chemistry is expensive, there is no way of doing research in this area with no money,’ she says. Bolzani adds that researchers are already starting to feel the pinch, with projects that were previously approved not being given the money to complete them.

According to Davidovich, the role of science, technology and innovation does not seem to be appreciated by President Roussef, which is resulting in contradictory policy decisions. ’The president signalled the importance of science, launching the Science with no borders initiative in 2011, which has the ambitious objective of sending 100,000 young people to study abroad, and nominated a science minister with technical expertise, Marco Antonio Raupp, former president of the Brazilian Society for the Advancement of Science,’ he says. However, he notes: ’The reduction of the budget does not meet the strategic view of science, technology and innovation as essential ingredients for development.’

Davidovich also highlights that the government is wasting Brazilian technical capacity, established after decades of consistent training, and that the cuts will seriously damage the international standing of the country. He points out that while Brazil is shrinking its science spending, China, the fastest growing member of the BRICS grouping (Brazil, Russia, India, China and South Africa), set aside Yuan32.45 billion for basic research in 2012 - an increase of 26% over the previous year. ’It is interesting to note that in the same speech the Chinese premier Wen Jiabao announced an increase in the budget for science, there was a fall in the growth rate of the country [from 8% to 7.5%], indicating a sharp awareness of the role that science, technology and innovation will play in the future of the country’, he says.

The Ministry of Science, Technology and Innovation was contacted by Chemistry World, but declined to comment.