Carbon nanotubes are no longer the proud boast of 21st century materials scientists - mediaeval sword-smiths got there first.

Carbon nanotubes are no longer the proud boast of 21st century materials scientists. It appears their discovery was unwittingly pre-empted by mediaeval Muslim sword-smiths whose tough Damascus blades taught the Crusaders the true meaning of cold steel when they fought over the Holy Land.

Peter Paufler and colleagues at Dresden’s Technical University discovered carbon nanotubes in the microstructure of a 17th century Damascus sabre. Intriguingly, the nanotubes could have encapsulated iron-carbide nanowires that might give clues to the mechanical strength and sharpness of these swords. 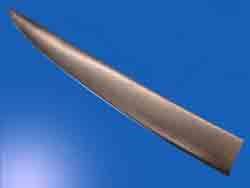 Mediaeval nanotubes, a cut above the rest

To Europeans, Damascus steel blades seemed magical. Not only could they cut a piece of silk in half as it fell to the floor, they could cleave rocks and their own swords without losing sharpness. The problem facing sword smiths was how to produce steel that was both hard and malleable. Too much carbon and the steel is hard and brittle; too little and it is too soft and malleable to hold an edge when sharpened. Damascus steel blades were forged out of small pure cakes of steel containing around 1.6-1.7 per cent carbon, called wootz. Produced in India, wootz cakes were shipped to Damascus where expert sword smiths fashioned them into blades.

Steel that contains this amount of carbon forms plates of cementite (Fe3C) which, on its own, makes the steel brittle. However, during the forging process at around 800oC, small amounts of ’impurities’ were added containing many first-row transition elements (such as V, Cr, Mn, Co, and Ni), tungsten, and some rare-earths. which together had the effect of forming the cementite into bands. This gave the blades great strength, malleability, and a distinctive wavy-band pattern known as a damask. The skill had been lost by the 18th century,   when supplies of these ores and impurities ran out.

Micro-structural examination of the bands had previously shown they contained nanowires of Fe3C. Now, Paufler’s team has uncovered the presence of carbon nanotubes by exposing a small piece of a blade to corrosion by hydrofluoric acid, and examining the effects under a high resolution scanning electron microscope. In some remnants the researchers saw evidence of incompletely dissolved Fe3C nanowires, suggesting the nanotubes could have encapsulated the nanowires. This would not only have given the blades their renowned strength and sharpness, but also their characteristic banding pattern. ’The nanotubes probably came from the addition of mandatory organic ingredients we know were added during wootz production, such as wood from the tree Cassia auriculata and leaves from Coltropis gigantean,’ said Paufler.   ’So, by empirically optimising their blade-treatment procedures, these craftsmen made nanotubes more than 400 years ago.’

Carbon nanotubes have been fixed to metal surfaces to increase the range of metals that can be coated by electroless deposition.

Reinforcing polymers with carbon nanotubes; it’s all on the surface.