US scientists can now control the reactions occurring inside cells. The technology could lead to the manipulation of cell functions in the future, they say. Cells could be triggered to release a therapeutic protein at disease sites, or could be stimulated to regenerate tissue, in response to external cues.

’Cells respond to cues in their environment that influence or regulate their behaviour,’ explains Milan Mrksich from the University of Chicago who, together with Rafe Petty, carried out the work. ’This is done by protein receptors on the cell surface that interact with ligands in the extracellular environment [outside the cell].’ For example, stem cells receive cues from growth factor proteins to become a particular cell type - a nerve, bone or skin cell.

Mrksich and Petty created cell-surface protein receptors and threaded them through a cell membrane so that the receptor was outside the cell and the protein within the cell. The team designed ligands to initiate and control phosphorylation reactions in the cell. ’We could use this mechanism to signal a phosphorylation change in the receptor, which would be the first step in a series of molecular events that would lead to a change in cell function,’ says Mrksich. 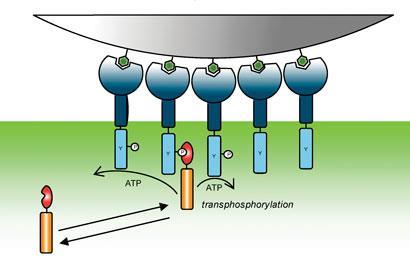 Clustering of cell-surface receptors (dark blue) by ligands attached to a bead (grey), brings proteins within the cell (pale blue) closer together, triggering an increase in phosphorylation reactions between the proteins catalysed by a cellular enzyme (orange)

Normally, when ligands are introduced to a cell, they bind to the receptors, causing them to dimerise. This brings the receptors closer together so that, with the aid of an enzyme already present in the cell, the proteins can phosphorylate each other. To control this effect, the researchers prepared a bead a couple of microns in size and attached the ligands to its surface, fixing them in place. As the ligands bound to the receptors, many receptors were brought closer together, increasing the phosphorylation rate.

’The experiments provide further confirmation for the central role of ligand induced receptor dimerisation in cell signalling across the cell membrane,’ says Joseph Schlessinger, professor of pharmacology from the school of medicine at Yale University, US. But, he adds that research on how to make the synthetic receptor approach commercially viable is needed.

In the future, Mrksich hopes to regulate gene expression. If you can turn on or turn off the expression of a set of genes in a cell, you could control the cell function, he says. ’So if we wanted to regulate gene expression in an animal, we could transplant cells that were engineered with our strategies with these protein receptors into an animal, have those cells function normally within the animal tissue in which they are inserted and then, when the cells see the cues that they are engineered to respond to, they would selectively take on a new function,’ he adds.