US scientists have developed a model of the breast ductal system that could be used to discover abnormal cells or deliver drugs at locations further along the ducts than other techniques. The model fits on a slide, enabling on-chip experiments.

The human mammary gland consists of branched ducts with channels of decreasing size that are increasingly more difficult to access to obtain cell samples. This is because the channels get too narrow so the liquid inside them does not move around enough for probes to pass through to collect the cells. Now, a team led by Sophie Leli?vre and James Leary at Purdue University, Indiana, have mimicked the ductal system by making branched channels from polydimethylsiloxane (PDMS). They then moved magnetic particles along the channels through static fluid using a magnet.

The team coated the PDMS with extracellular matrix - a protein scaffold that supports cells. From this, they formed a tubular structure in which to culture mammary epithelial cells. Due to stress from the tube walls, the cells did not survive in straight tubes, so the team engineered U-shaped half channels, or hemichannels, instead. They were then able to culture cells on them, and covered the channels with a PDMS membrane to form tubes. 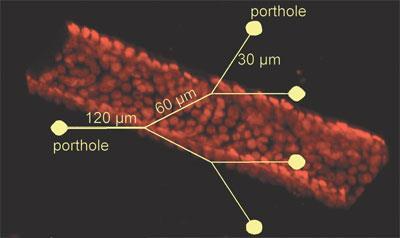 Schematic of the branched channel system

After injecting iron oxide superparamagnetic submicron particles (SMPs) into the main channel, the SMPs moved around randomly. But on application of a magnet, they gathered on one side of the channel and could be directed to enter and travel along specific branches. At just 0.86um in diameter, the SMPs are small enough to get through the narrowest parts of the 30um wide ducts.

’The idea was to reproduce in vitro a model that mimics the characteristics of the ductal system,’ explains Leli?vre, ’to test the magnetic particles to see how innocuous they would be to the cells and how we can target those particles to the abnormal cells.’ Preliminary toxicity assays have revealed that the SMP solution was not toxic to cells.

’Being able to mimic in vivo cellular polarity and overall tissue structure on a 2D surface is a great practical tool that many researchers can take advantage of and apply to many other applications,’ says Yusuke Torisawa, an expert in the development of cellular micro-devices from Harvard University, US.

In the future, the team hopes to generate normal and diseased cells together in the hemichannel, using different cancer cell types, to assess the targeting of SMPs to specific cells. Iron oxide SMPs could be used as x-ray and MRI contrast agents. They could also be coated with targeting molecules to target tumour cells and either carry anti-cancer drugs or trigger heat induced cell death on exposure to an alternating magnetic field energy.