Japanese chemists have developed a method for constructing complex halogen-containing organic molecules from simple compounds in a single step. The discovery could pave the way for the synthesis of many potentially useful naturally occurring molecules, the authors report in Nature today.1

Until now, it was difficult to incorporating halogens such as chlorine or iodine into complex molecules in a way that allowed complete control over the geometry of the product. Tailoring the orientation of different atoms bonded to the halogen-bearing carbon was a task so complex that only enzymes were up to the job.

The new reaction, developed by Kazuaki Ishihara and co-workers at Nagoya University, Japan, instead uses a chiral phosphorus-containing promoter and a source of iodine. The team used these compounds to zip up small precursor molecules into structures that each contained multiple rings, all with controlled chiral geometry at several atoms, including the all-important iodine-bearing carbon.

The phosphorus-containing molecule mimics the role of an enzyme by physically blocking one side of the substrate molecule. As the substrate twists up to form its new rings, the iodine can only be delivered to the most accessible side, so that only one of the two possible mirror-image forms of the molecule is created. The reaction was not successful using the other halogens, but once attached, an iodine atom can simply be converted to bromine or chlorine without affecting the geometry at this part of the molecule. 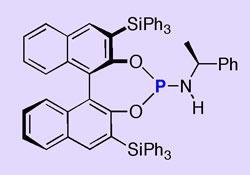 The chiral phosphorus-containing promoter (above) forms a complex with the iodine source. As a simple substrate folds up to form new rings, the complex directs the iodine to just one face of the product.

For this work Ishihara drew on his previous success in designing molecules that act like enzymes. He had already prepared a reagent that promotes a similar reaction while adding hydrogen atoms with chiral selectivity.2

’Any method you can use to make multiple carbon-carbon bonds is impressive. To do it with this level of selectivity is even better,’ said Simon Jones, an organic chemist at the University of Sheffield, UK. Jones described the development as ’a really nice step forward,’ adding that this combination of promoter and iodine source was particularly unusual.

Many naturally occurring compounds, particularly those made by some marine organisms, contain chiral halogenated carbon atoms and could be a rich source of pharmaceutical leads. Ishihara told Chemistry World: ’I expect the technique will be applicable to the synthesis of other complex halogenated molecules.’ The key reactive part of Ishihara’s precursor for these reactions, a 3-methyl-2-butenyl group, is very simple and could be incorporated into many more substrates, he added.

Jones agreed that the long-term goal of adapting the method to a variety of substrates would be ’very significant’ if it could be achieved, as this would be ’coming close to what nature can do.’ A key challenge would be to improve the efficiency of the promoter to catalytic levels, said Jones.