US scientists have proposed a new theory for how carbon nanotubes grow. If their predictions are borne out experimentally, the theory could have practical implications for researchers trying to control nanotube growth in the lab. But experts say the theory may be unrealistic.

Carbon nanotubes are essentially rolls of graphene - hollow cylinders of carbon in which the atoms are arranged in a hexagonal lattice. But they don’t roll up like sheets of paper; they self-assemble or ’grow’ in the direction of a tube’s length, prompting scientists to wonder how exactly each new layer of carbon is formed. 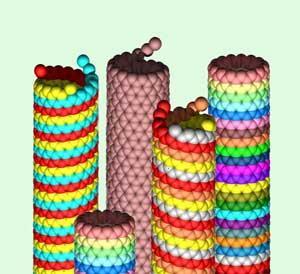 Boris Yakobson and colleagues at Rice University, Houston, and the Honda Research Institute in Ohio have now put forward a formula that they say provides a model for the extension process. Yakobson likens it to weaving a rug - the more atomic kinks or ’threads’ are exposed at the growing end, the faster growth proceeds.

’The kinks are an extension of the spiral lines of atoms that make up the tube,’ explains Yakobson. ’You can visualise these kinks as the ends of threads, so the more thread ends you have, the faster the tube will grow.’

The number of kinks at the growing edge is ultimately dependent on the tube’s chirality, or the angle at which it is ’rolled’. Chiral tubes expose many kinks and so form quickly. A non-chiral tube, by contrast, is not formed by adding to a spiral ’thread’ but by the addition of complete rings of carbon atoms. Therefore, explains Yakobson, an energy barrier has to be overcome each and every time a new ring is initiated.

Nicole Grobert, a nanotubes expert based at the University of Oxford, UK, warns that the team’s work is purely theoretical and unlikely to explain growth processes in real life systems. ’It has nothing to do with reality, I think, because the conditions in which the tubes grow are very chaotic,’ she says. ’You have to look at the different methods that are used to grow nanotubes and I should think all of these have different growth scenarios, so you can’t come up with one theory and explain all of them.’

David Tom?nek, who studies nanostructured materials at Michigan State University, East Lansing, US, says the model contradicts everything that is known about the formation process of nanotubes in the presence of catalytic particles. ’It also contradicts common sense in claiming that a couple of yarns, representing monoatomic carbon chains, should nicely attach to each other to form a hollow tube,’ he says.

’The jury is still out,’ admits Yakobson. ’We’re going to have to go through never-ending verification processes.’ But he argues that data from previous studies has so far supported his team’s findings - for example, data taken from different growth methods shows an abundance of nanotubes with large chiral angles, as predicted by the formula.

Understanding how nanotubes grow would help scientists gain control over their structure, potentially leading to tubes with predefined properties and applications, says Grobert. But she thinks Yakobson’s theory of nanotube growth is too far fetched.