Counterion does the twist

Chiral phosphate and catalyst work together to improve selectivity

US chemists have achieved a breakthrough in the design of catalysts that selectively produce chiral compounds. Dean Toste and co-workers at University of California, Berkeley report in Science this week that the catalyst molecule doesn’t need to do all the chiral work itself.

A chiral molecule can’t be superimposed onto its mirror image. The ability to selectively produce only one of the mirror-image forms, or enantiomers, is important in making medicinal compounds. This is often done with a metal catalyst bound to a chiral ligand, which creates a ’handed’ environment that directs the reactants towards each other in a specific way that favours one enantiomer over the other - just as a left hand fits snugly into a right hand.

Now Toste has shown that the chiral information can come from the catalyst’s negatively-charged counterion. ’The ideas been around, there’s been various attempts in the literature,’ Toste said, but the results hadn’t been promising. This is the first time the approach has dramatically improved selectivity, and Toste believes the idea can now be applied to many other catalytic reactions. 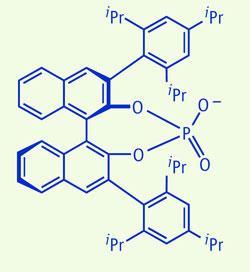 Toste said there are two complementary concepts to the work, which focussed on reactions of allenes with gold catalysts. Firstly, Toste’s team found that an achiral ligand and a chiral phosphate counterion outperformed several conventional chiral catalysts to give 97 per cent excess of one enantiomer, showing that the counterion can work on its own to direct enantioselectivity.   Secondly, the group found that a chiral ligand and counterion worked together to give good selectivity on a substrate that is otherwise difficult to control.

’The combination of the two [concepts] makes it very powerful’ Toste told Chemistry World. He thinks the technique was so effective because gold tends to form linear complexes, meaning the ligand is usually ’on the opposite side of the metal from where the action is happening.’

Toste is hopeful that this approach could be used to improve other catalytic systems. ’We’re looking, and we have some nice leads,’ he said. ’It’s open enough right now that any transition metal catalysed reaction could be suitable.’ Toste points in particular to the hydrogenation reaction as an important process that could benefit.

Toste accepts that the technique won’t work for everything, and that the counterion could make it too expensive. ’There will be plenty of times where the chiral ligand alone will win,’ he said. But he expects that this approach could be adopted by combinatorial chemists, who screen large libraries of catalysts to find the best candidate for specific reactions.

’This is not exactly a new principle, but certainly the best demonstration of it,’ said Peter Scott of the University of Warwick, UK. The selectivity is ’approaching something that could be practical’, he said. There are still ’many challenges’ ahead if this approach is to be applied to other, more demanding and important reactions, but ’it is something people will readily be able to try’ he said.