Scientists in Australia have found a new way to synthesise ’yolk-shell’ nanoparticles with tunable shell thickness and pore size. The particles could have applications as nanoreactors and in drug delivery.

Yolk-shell nanoparticles consist of a shell which holds a core particle inside an interstitial space - the structure resembling that of an egg. But while there is much interest in these structures, current synthetic methods are often tedious, involving many steps and low yields.

To overcome this, Max Lu and his team at the University of Queensland in Australia used a vesicle templating approach. They mixed a fluorocarbon surfactant, FC4, with a chosen core particle to form a self assembled vesicle. They then added tetraethoxysilane (TEOS), to form a mesoporous silica outer shell. The shell then shrinks during hydrolysis and condensation of the TEOS, forming the yolk-shell structure. Heating the particles removes both FC4 and a second surfactant (F127) used to create pores in the outer shell, to give the final product. 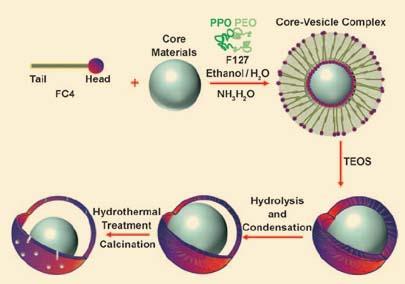 The team made yolk-shell structures with various types of movable cores, such as gold, SiO2, and magnetic Fe3O4

Using this method the team prepared structures with mesoporous spheres and rods, silica spheres, gold particles and magnetic Fe3O4 particles as cores. They found they could alter the pore size simply by altering the ratio of FC4 and F127. They were also able to control the shell thickness and overall particle size by varying the amount of surfactant and TEOS respectively. 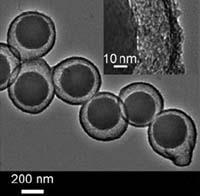 The presence of the pores in the outer silica shell gives these structures unique properties. ’The mesoporous shell is very useful for nanoreactors and for drug delivery,’ says Shi Zhang Qiao from the team. ’We can adsorb enzymes onto a core and then form these yolk-shell structures, for example,’ says Lu. ’As the shell is controllable, we can control the transport or diffusion of the biomolecules into the shell.’

The team has also tested the release pattern of ibuprofen from one of the yolk-shell structures. The results show a three stage delivery depending on whereabouts in the structure the drug is found. However Lu stresses that this is a preliminary result. ’We will definitely seek collaboration to do more drug delivery in vitro and in vivo tests,’ he says.

However Younan Xia at Washington University, US, an expert in nanomaterials and drug delivery, says the team’s method is simply an extension of previous work in the field.   Dongsheng Xu at Peking University in China, agrees: ’While the surfactant system used is new, template-assisted methods have been used to synthesise yolk-shell particles before,’ says Xu.