A cheaper and safer to produce breath test for diabetes has been developed by scientists in Canada. The titanium nanoparticle-based sensor detects acetone, a biomarker of type 1 diabetes, even at 90% relative humidity. 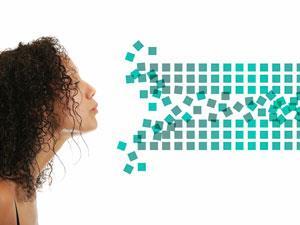 Diabetes is a chronic condition which requires life-long treatment and monitoring. Untreated diabetes can lead to dangerous complications, such as ketoacidosis. Diagnosing diabetes quickly can be life-saving.

Commonly, diabetes is diagnosed and monitored through blood sample analysis. Acetone levels in breath can be measured by time-consuming and difficult-to-access gas chromatography and mass spectrometry. Other non-invasive breath sensors based on metal oxide semiconductors, whose conductivity changes upon acetone adsorption, are fabricated via unsafe and expensive flame pyrolysis. To be useful for diagnosis, breath sensors must be able to detect parts-per-billion levels of acetone from a complex mixture of breath components including water vapour.

Gu Xu and colleagues at McMaster University, have overcome these obstacles with a new semiconductor sensor. Fabrication of the sensor involves screen printing titanium dioxide nanoparticles. This is cheaper and safer than the pyrolysis method. ‘The sensor survived under the presence of high humidity, and its response to the targeted gas was fast. Its sensitivity is high enough for type 1 diabetes diagnosis,’ says Lucy Deng, who conducted the research.

‘There is potential for such a device in a primary healthcare setting when undiagnosed diabetics present with the symptoms of ketosis,’ says Tom Blaikie from Oxford Medical Diagnostics, UK, who have tested a spectroscopy-based acetone breath detector on child patients. He sees the new sensor’s utility for mass screening as part of a suite of tests only, as acetone levels in patient’s breath vary widely. Blaikie reckons that the researchers will have to address issues such as the sensor's susceptibility to other breath components, before it can be evaluated in a clinical setting and compared to state-of-the-art devices.

Further research is ongoing in the Xu group to improve the sensor’s sensitivity and to investigate different semiconductor materials.