The levels of rare carbon and oxygen isotopes in fossilised dinosaur teeth suggest that some dinosaurs had body temperatures comparable to modern mammals. The technique used in the studies could now be applied to other species of dinosaur to help solve a long running debate over whether the animals were warm or cold blooded.

For decades, palaeontologists have argued over whether dinosaurs were endothermic - ’warm blooded’ - like mammals, or ectothermic - ’cold blooded’ - like reptiles. Endotherms stay warm by burning food, while ectotherms get their heat from their surroundings - lizards, for example, bask in the sun. Some larger animals like leatherback turtles stay warm just by virtue of their small surface area to volume ratio, a phenomenon referred to as gigantothermy. But some dinosaurs were so large they must have risked overheating. 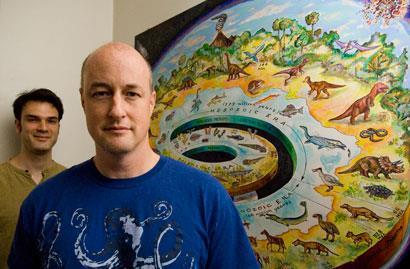 Recent models based on dinosaur growth rates have been used to estimate that the body temperature of the largest sauropods got as high as 40?C. Now a team of US and German researchers led by Robert Eagle at the California Institute of Technology has made novel use of a recently developed isotopic technique to show that at least some dinosaurs were probably slightly cooler - between 36-38?C. This suggests they had physiological adaptations to help them regulate their body temperatures - just as mammals do.

Eagle’s team focused on 13C and 18O isotopes that bond more stably or ’clump’ together at lower temperatures. ’People first started looking at the clumping of these two heavy isotopes in CO?2 gas in the atmosphere - to track where it came from,’ says Eagle. ’I started working on this mineral that makes up bones and teeth and contains a very small component of carbonate.’ Measurements of the clumping can be used to estimate the temperature at which the carbonates originally precipitated. 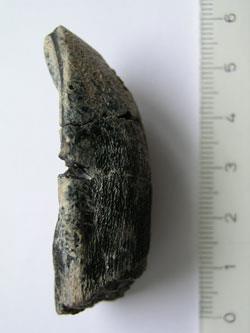 The researchers estimated average body temperatures for different sauropods - Brachiosaurus, Camarasaurus and another in the Diplodocus family. The temperature range they obtained suggests some of these large dinosaurs were neither cold like modern crocodiles and alligators, nor excessively hot. ’The numbers we got are striking because they’re very similar to most modern mammals,’ says Eagle.

The technique effectively does away with one of the unknown variables involved in reconstructing past temperatures, says Stephen Grimes, a geochemist at the University of Plymouth. ’Previously you had to model the isotopic composition of the fluid from which the tooth grew and use that in combination with what you measured on the tooth to reconstruct the temperature,’ he says. ’Now you can work out temperatures just by measuring something directly and plugging it into an equation.’ However, because clumping of the two isotopes is so rare, there is a reasonably large margin for error - about 1 or 2?C, he adds.

Penny Higgins, a specialist in isotope geochemistry at the University of Rochester, New York, says it is now up to the palaeontology community to combine the results with other interpretations of growth rate, body mass and behaviour to determine whether dinosaurs were warm blooded. ’The methods used in this paper cannot distinguish between a truly warm blooded organism versus one utilising gigantothermy to maintain body temperature,’ she says.

Eagle agrees the results don’t put an end to the debate, but thinks they provide more than just proof of concept, placing upper and lower limits on body temperatures. ’We might be able to say something more definitive if we made similar measurements over a big range of sizes, for example, by looking at juveniles or dwarf species,’ he says. ’If you thought they were gigantotherms, you might expect to see their body temperature differ across the sizes. If they were like mammals, you’d expect to see the same temperature.’