Cracking the genetic code from a single DNA strand

The prospect of treatments tailored to fit an individual’s genetic makeup is a step closer thanks to technology unveiled by US scientists. A team at Helicos Biosciences in Massachusetts has sequenced a viral genome by directly reading bases from individual DNA strands, with no need to amplify DNA, as traditional sequencing requires.

Conventional ’Sanger sequencing’, introduced 30 years ago, works by replicating DNA strands in the presence of fluorescently-dyed nucleotides. If dye molecules are taken up instead of normal nucleotides, they stop a new strand from growing further. By using four different fluorescent dyes that correspond to the four different nucleotide bases, and measuring the lengths at which strands stop growing, the base sequence can be deduced. But in order to get accurate information, large amounts of genetic material are needed, so enzymes copy the DNA thousands of times. 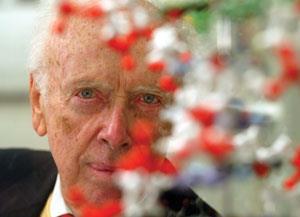 Nowadays, hundreds of thousands of DNA fragments can be amplified and read in parallel, meaning that mapping out the sequence of the 3 billion base pairs that make up the human genome is becoming ever cheaper. But the Helicos team have now demonstrated the potential of their next-generation method - ’true single molecule synthesis’ (tSMS) - by accurately reading the 6400 base pair long genome of the M13 virus.

The tSMS technique does not require DNA to be amplified, making the sequencing process cheaper and potentially more accurate as replication can allow errors to creep in. It attaches individual strands of DNA to a surface around 100 nanometres apart, using the tails of a long repeating nucleotide as anchors.

’We can then read off the strand sequence by adding a single nucleotide at a time,’ explains Tim Harris, senior director of research at Helicos Biosciences. ’We image a single dye label on a single nucleotide that is added to a single strand - then we add another one.’

One by one, the sequence can be built up on the DNA strand, providing direct access to sequences of more than 25 bases for each strand. By using a specially designed imaging camera, thousands of individual strands can be imaged at once, gradually allowing a picture of the genetic code to be built up.

’This is an elegant demonstration showing that single molecule sequencing has arrived,’ says Steven Block, a DNA sequencing expert at Stanford University, California.

’There is some way to go before this could map human DNA, but it is really a matter of scale,’ Block adds. ’If the technique can be used to measure 6000 bases there is no reason why it couldn’t potentially measure 3 billion in the future.’

For the moment, Helicos’s machinery is much more expensive than massively parallel conventional sequencing. Using such technology, the complete genome of Jim Watson, the Nobel prize-winner who helped discover DNA’s structure, was sequenced last year in two months for less than $1 million by Connecticut-based firm 454 Life Sciences, now owned by Roche Diagnostics. And California-based Applied Biosystems announced in March that they had sequenced the genome of a Nigerian man using reagents costing just $60,000 (though this price excludes labour).