A test that predicts individual patient's response to chemotherapy

A test that predicts an individual cancer patient’s response to different drugs is about to enter clinical trials, developers have announced. The chances of successful treatment will increase, they predict, while costs will decrease.

The test is based on an electrochemical device developed by Oncoprobe, a spin-out company from the University of Manchester, UK. The device will take two days to detect the chemo-sensitivity of an individual patient’s tumour to a range of anticancer drugs.

Chemotherapy is a hit and miss affair. With less than a 50 per cent success rate, dropping to around 20 per cent with some drugs, efficacy depends on a patient’s genetic make-up, metabolism and any specific resistance of their cancer type. Many patients are therefore exposed to unnecessarily debilitating drug toxicity, and dangerous delays in effective treatment, which worsens their condition. In the UK, the National Health Service (NHS) picks up the tab for ineffective drugs. But this is set to change.

All cells generate a membrane electric potential thanks to their internal enzyme redox chemistry. Oncoprobe’s ultra-sensitive electrochemical assay consists of a biosensor that detects and measures real-time in vitro changes to this cell membrane potential, thus indicating the effects of anticancer drugs on tumour cells.

The technology evolved out of personal tragedy. University of Manchester scientist David Geary’s wife died of cancer, and chemotherapy only made things worse towards the end. Friend and colleague biochemist David Woolley told Geary that clinicians could not predict patient response to chemotherapy.

As a corrosion scientist, Geary wondered whether electrochemistry could be used to predict which drugs would knock out cancer cells. Oncoprobe spun out from the University of Manchester in 1999 after a third scientist, Bob Eden, developed a working prototype. 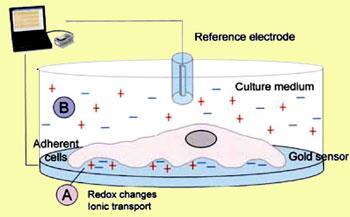 Oncoprobe scientists had previously shown that many human cells, including tumour cells, attach to a gold electrode and produce an electrochemical open circuit potential (OCP) significantly different from that of a cell-free system. Also, these OCPs undergo rapid and reproducible changes depending on how tumour cells respond to anticancer drugs. Typically, this involves reductions of around 50 per cent in the OCP if the cells’ internal biochemistry reacts to the drugs. This produces detectable changes in cell-membrane potential well before any morphological changes are observed.

The key to the bioassay unit’s success is the passiveness of the technique. ’We don’t do anything to the cells,’ said Oncoprobe chairman, Jim Bristow, ’simply take them as a biopsy, separate them from normal cells, and put them into the sensor to be measured.’

This compares to usual methods of laboriously growing cell cultures where changes can occur to cell characteristics after each cycle of cell division. This means the final tested cells might have totally different characteristics to the original tumour cells taken in biopsy, including response to anticancer drugs. With the new electrochemical bioassay system, biopsied tumour cells are placed immediately on the probe before any changes can take place. It is therefore faster and more accurate, being closer to the in vivo situation. 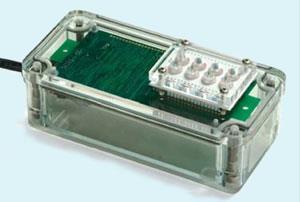 OCPs generated at the cell/gold electrode interface are measured by the unit (Fig. 2), processed and displayed via analytical software on a computer. Chemotherapeutic cell death shows up as a curve whose shape reveals how fast the drug has worked and how the cell has died.

After successful results on laboratory rats, Oncoprobe are bullish about embarking on their first human trials with 40 renal carcinoma patients at Manchester’s Christie Hospital. The company is also in discussion with research groups in the UK and the USA, to begin studies on leukaemia and colorectal cancers. ’Clinicians need to know which anticancer drug best suits a particular patient and Oncoprobe can supply reliable and cost effective information that will improve the effectiveness and safety of chemotherapy’, said Bristow.