Taking inspiration from nature, scientists have created a catalyst that is 10 times better at making hydrogen than its enzyme counterparts. The cheap nickel catalyst could pave the way for the industrial production of hydrogen - a step on the road to a hydrogen economy. 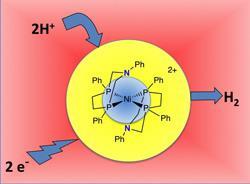 Platinum electrodes are capable of generating hydrogen in electrochemical cells but the metal is expensive and scarce. Evolution has produced hydrogenase enzymes which use a much more common element - iron - in their catalytic cores.

Daniel Du Bois of the Pacific Northwest National Laboratory (PNNL), US, and colleagues mimicked the active site of hydrogenases by creating a nickel complex that was surrounded by pendant amines. The active site of hydrogenases have these moieties and they are widely thought to act as proton relays, channelling protons into place so that they can be joined to form hydrogen. The team previously synthesised complexes which had several pendant amines loosely tethered to the metal centre so, once protonated, they could bend round to deliver the protons where they are needed. However, they found that once one amine was protonated, a second amine would also coordinate, creating what they call a ’pinch complex’ preventing proton delivery.

By cutting the number of pendant amines and positioning them on opposite sides of the molecule the team stopped this pinching. The result was a flattened complex which, upon application of a potential difference, could produce hydrogen at a rate of 106,000 molecules per second - 10 times faster than even hydrogenase enzymes.

’This is quite substantially faster than the other catalysts out there,’ says Chris Pickett from the University of East Anglia (UEA), UK, who also makes hydrogen-evolving catalysts. ’But I would say this system is probably not commercial as it stands.’ He points out that the system wastes much of the electrical energy input as heat.

The solvent the reaction is conducted in is also important. Industrially, the ideal solvent would be water, but this system was initially tested in dry acetonitrile with protonated dimethylformamide (DMF). In this environment, the catalyst produced   33,000 hydrogen molecules per second. But when small amounts of water were added the catalyst’s efficiency tripled. They propose that the water acts as a proton transfer medium, accelerating the transfer of protons from the DMF to the catalyst.

However, co-author Morris Bullock, also from PNNL, is sceptical that water will ever be the best medium for hydrogen production. ’Often people say the experiment should be done in water because that’s what the enzyme uses,’ he says, ’but actually if you look at the structure [of it] there’s essentially a hydrophobic pocket where the active site is, so the enzyme doesn’t want to have water there.’