Medicinal chemistry is the new best friend for dog owners who overfeed their pets.

Pfizer has been granted a licence by the US Food and Drug Administration to market the world’s first medical treatment for canine obesity. The product, called Slentrol, was originally tested as a potential treatment for overweight people. But it was found to cause undesirable side-effects including abdominal distension, colic, diarrhoea, flatulence and headaches.

Slentrol is a selective microsomal triglyceride transfer protein inhibitor, blocking the assembly and release of lipids from the gut wall into the bloodstream. It also appears to have effects on the nervous system in suppressing appetite but the company admits that the precise mechanism for this is unclear. 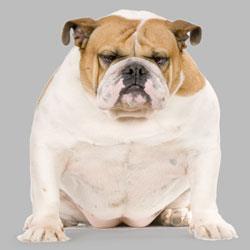 A simple imbalance between calorie intake and exercise

As carnivores, dogs can tolerate much higher levels of fat in the diet than humans and avoid some of the side-effects caused by preventing lipid absorption. Yet treatment can still cause problems in dogs such as vomiting, and the FDA licence authorises its use only under veterinary prescription.

Obesity is a growing problem across the developed world in dogs as in their owners. Alex German from Liverpool veterinary school, UK, estimates that about 40 per cent of dogs in the US and Europe are overweight, with about 10 per cent clinically obese.

As in humans, canine obesity is linked to a number of diseases including heart problems, diabetes and arthritis. Typically, the owners of an overweight dog can expect their animal to die two years earlier than one of normal weight, German says.

The duration of treatment with Slentrol will depend on the extent of the animal’s obesity and its response to treatment but may last for several months. Given as a liquid which can be taken orally or added to food, treatment is likely to cost the owner between $1 (50p) and $2 a day, according to the company.

German, who runs a special clinic for the owners of obese pets, acknowledges drug treatment may help in the short term but he is sceptical about its long term value.

’Canine obesity isn’t a complicated issue - it’s a simple imbalance between calorie intake and the amount of exercise that the dog takes. It should be easy to prevent but it is complicated by the strong bonds between the animal and its owner. It’s also difficult to stop other members of the family from giving the dog treats. The bottom line is that successfully maintaining the dog at a healthy weight needs a change in the owner’s behaviour,’ he said. John Bonner