German scientists have built and demonstrated the first synchrotron to work on neutral molecules. The disc-shaped device, just 25 centimetres across, can speed up or slow down a focused beam of particles moving around a ring. It could be used to study collisions of cold, slow-moving molecules, allowing chemists to probe their behaviour with a resolution impossible to achieve at higher temperatures.

Cynthia Heiner and colleagues, from the Fritz Haber Institute of the Max Planck Society in Berlin, designed the synchrotron, which works on broadly the same principles as the conventional particle accelerators of Cern in Geneva, and the Diamond light source in Oxfordshire. Those synchrotrons use magnetic and electric fields to accelerate charged particles round immense discs at close to the speed of light. But as research co-author Gerard Meijer explained, manipulating neutral molecules is much harder, because they have no overall charge for fields to affect. 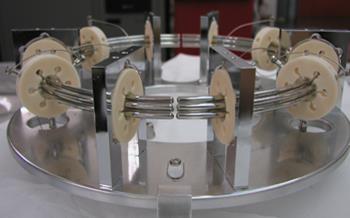 The ammonia (NH3) molecules tested in the synchrotron do have a dipole moment, however, which provides a ’weak handle’ for electric fields to grip, said Meijer. The researchers altered electric field strength across the ring, so that each end of the polar molecule experienced slightly different forces. With careful computerised switching of the fields, Heiner’s team kept the ammonia molecules focused to a 3mm beam and travelling round the ring in a packet moving at around 100 metres a second. A second molecular packet could be sent round too, trailing the first by some 20cm. In principle, the team hopes to be able to control molecules of different kinds moving in opposite directions around the ring, though they will all have to possess a dipole moment.

The molecules are trapped at about 0.5mK, just a fraction of a degree above absolute zero. Collisions at these temperatures would be very gentle, said Meijer, not enough to break the molecules into pieces. They lead instead to internal vibrations and rotations, which would allow scientists to study the kinds of excited species that might presage a chemical reaction in detail at slow motion.