For us humans, iridescent shine is associated with superficial prettiness - from cosmetics to car paint, but for water-dwelling creatures it’s a fundamental survival mechanism. A metallic sheen can dazzle and confuse predators, protecting fish swimming at shallow depths. Now, scientists in Israel have discovered the surprising secrets of the specialised crystals in fish skin that accomplish this feat.

The shine or iridescence of fish scales is caused by so-called photonic crystals made of guanine in the skin beneath them. Although this fact has been long-accepted, the arrangement of guanine molecules in these crystals was unknown.

Lia Addadi and her colleagues from the Weizmann Institute of Science in Rehovot, Israel have studied the growth of these crystals to discover how their shape produces iridescence. ’Growing them in the lab, we could compare the shape of the crystals in the fish skin to what would be expected from [guanine],’ Addadi told Chemistry World. 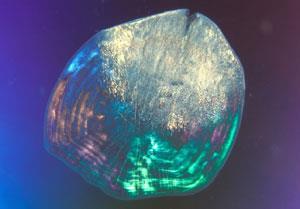 Using x-ray diffraction, the team found that - as expected - the structure of the fish crystals grown in the lab was the same as that of anhydrous guanine. But to Addadi’s surprise, when they examined the crystals in fish skin itself using electron microscopy, they found that the crystals had a very different shape to the lab-grown ones.

’In the test tube, the crystals grow into a prism shape, whereas in the fish skin, they form thin plates’ she explained. ’I was astounded - this goes against all the rules of how crystals grow.’

When a crystal grows, forces of attraction between the molecules are stronger in one direction, so the molecules stack up to favour these strong attractions. This means that the shape of the crystal can be predicted from the molecules. ’The fish must expend energy to actively interfere with the natural growth of the crystal, in order to form these thin plates,’ said Addadi. 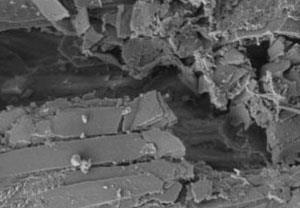 The thin crystal plates stack into layers, which are extremely effective at impeding light waves. The thickness of the plates and the distance between each plate corresponds to the wavelength of visible light, so when the light strikes the crystal stack, it is interfered with to create the iridescent metallic lustre of fish skin.

The next step for the scientists is to try to copy the formation of these specialised crystals. ’These fish have evolved a mechanism to control the growth of the guanine crystals,’ said Addadi. ’We’re not sure how they do this, but we can predict that there are inhibitory factors within the skin cells that interact with the crystal while it’s growing.’

So the team’s next step is to uncover what these inhibitory factors are and exactly how they work. Once they accomplish this, the evolved mechanism can be harnessed to produce the same dazzling iridescence out of the water and in the laboratory.