Japanese researchers have created sub-nano scale platinum clusters with high catalytic activity for use in fuel cell applications.1 The tiny catalyst particles - the smallest of which contain just 12 atoms in total - could help to conserve the planet’s limited supply of platinum.

The team found that as they decreased the size of the clusters, their catalytic activity for the reduction of oxygen increased. At 12 atoms, each and every atom was exposed at the surface and the catalytic current produced was 13 times that of commercial platinum nanoparticles, which by contrast contain hundreds or even thousands of atoms. According to the researchers, however, the improved performance is probably not due to a simple increase in surface area but to quantum size effects that are not yet fully understood. 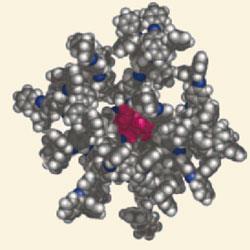 Lead researcher, Kimihisa Yamamoto of Keio University in Yokohama, says the fact that their sub-nano clusters perform so well goes against perceived wisdom within the field. ’In the community of catalyst chemistry - especially fuel-cell catalysts - the fact that a platinum nanoparticle around 3 nanometres exhibits the best performance has become an established theory. However, our findings at least suggest that these sub-nano clusters made under specific conditions exhibit a high catalytic activity.’

The team created their platinum clusters by adding platinum (IV) chloride to dendritic phenylazomethine (DPA) templates - branched molecules that function as rigid, cage-like structures in which the metal atoms became trapped. They were able to tightly control the number of metal coordination sites, and therefore platinum atoms, in each cage. Adding a reducing agent released the platinum clusters as  stable structures.

According to Yamamoto, their results will lead to drastic reductions in the amount of platinum needed in fuel cells, with further progress becoming possible through the incorporation of a second metal into the platinum-based clusters. Although decreasing the size of particles is generally thought to decrease the reduction potential, this does not seem to hold true when sub-nano particles are bimetallic, he notes.

’Size and shape are the two most important parameters in determining the activity of a catalyst. Size control is what we would like to achieve too, but it has been difficult using our synthetic method. Interestingly, the method described in this paper cannot control the shape. So it is still a challenge to develop a method capable to controlling both size and shape,’ says Xia.