Forget Lego and Meccano, the latest techie toy for surreptitiously educating unsuspecting children has arrived - a mini hydrogen fuel-cell-powered car, complete with its own filling station.

The H-racer, which measures just 16cm by 7cm, has been launched by Chinese company Horizon Fuel Cell Technologies, Shanghai, with the aim of giving fuel-cell technology more prominence. The toy gets its racing power from hydrogen produced externally - in the mini fuel station - which then fills a balloon inside the car. The hydrogen is produced electrochemically when a small solar-powered current passes through water in the fuel station. An on-board fuel cell uses the balloon-tank full of hydrogen to power the H-racer for up to four minutes of clean, pollution-free driving, claims Horizon. 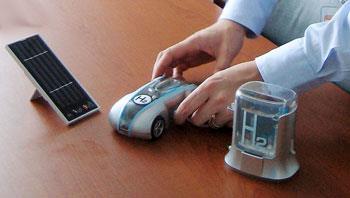 Toy car highlights the challenges of hydrogen production and storage

’I like the look of the car and would be happy to play with one,’ said Nigel Brandon, director of Ceres Power, a UK fuel cell company.

Vroom-vrooming aside, the H-racer has a serious message, Brandon said. ’Many auto makers and fuel companies are attempting to develop a hydrogen powered car,’ he said, although the H-racer does not use high-pressure hydrogen, currently favoured by full-size-vehicle manufacturers.

’But it is important to point out the issues associated with hydrogen production and storage to help people understand we are still a long way from the widespread availability of hydrogen powered passenger vehicles,’ he added.