US researchers have made a nanodevice that can eavesdrop on a cell’s mutterings, and they say it could be adapted to listen in on conversations between cells. The nanoplasmonic resonator developed by the team is able to visualise and amplify chemical signals sent by a cell allowing them to see its concentration in sub-micrometre detail. 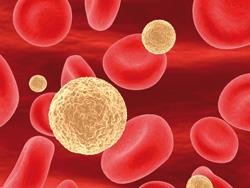 T cells use chemical messages to signal each other and control the immune system. Upon meeting a foreign antigen, the immune system’s T cells surround themselves with IL-2, reminding the T cell to replicate itself, as well as sounding the alarm, says coauthor Sheng Wang of the University of California, Berkeley. This makes chemical gradients of interest to scientists trying to understand how cells work.

The concentration of IL-2 near an active T cell was believed to be very high, dropping off quickly so that T cells far from the fight don’t waste energy preparing for battle. Now, Wang and his colleagues have seen this firsthand. They showed that IL-2 is 100,000 to a million times more plentiful within about a micrometre of the cell than it is further away.

The team listened in on the cell using a nano-engineered quartz coverslip. They dotted the coverslip with cylinders, comprising a silicon dioxide disc 5nm thick sandwiched between two gold discs, each 20nm thick. These cylinders, 100nm across, formed a grid with 500nm spacings.

The researchers then attached T cells and antibodies that capture IL-2 to the coverslip, and then induced the T cells to secrete IL-2. To visualise IL-2 bound by the antibodies, they added another antibody bearing a fluorescent molecule, allophycocyanin, which binds to the first set.

When a mercury lamp was shone on the coverslip, the nano-engineered cylinders concentrated the light like a spotlight, illuminating the  allophycocyanin tags. Moreover, the red wavelength of light emitted by the fluorescing allophycocyanin matches the device’s resonant frequency. With both of these amplifications, the signal coming from the engineered section of the coverslip was over 100 times stronger than from unpatterned areas. This allowed the researchers to create a map of the cell’s chemical communication.

Michael Dustin, an expert in T cell activation at New York University, US, says that the increase in sensitivity afforded by the resonator ’would enable automated devices that monitor human immune responses to work faster and less expensively’. The sensitivity is particularly important, he says, because T cells produce lower concentrations of signalling proteins like IL-2 when activated by infection rather than artificial stimulation.

Wang says that cell signalling can answer bigger questions, like how cells organise. Many of the messenger molecules that help cells arrange themselves, such as those modifying junctions between neurons, need to be kept close to their target site to avoid disrupting other cells. He says that to understand these interactions, ’we have to eavesdrop on the cellular whisper’.