Researchers have developed an imaging technique which will allow scientists to study light elements such as carbon and oxygen using ’hard’ x-rays. They say the new form of imaging could be used to study reactions in situ.

In traditional x-ray imaging, x-rays are passed through a sample to create an image based on absorption of the material. Multiple images can then be reconstructed by computer to create a three-dimensional image. Often researchers combine this imaging with spectroscopy, to gain information about the chemical environment of an element. 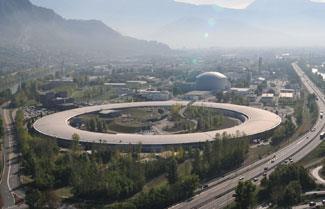 Researchers at the ESRF synchrotron at Grenoble, France, produced hard x-rays to look beneath the surface of materials made of lighter elements

However, problems arise when looking at lighter elements such as carbon, oxygen and nitrogen, which require ’soft’ x-rays. These x-rays are not powerful enough to penetrate larger samples, and so can only provide information about what’s happening at the surface of a material.

A joint project between the University of Helsinki, Finland, and the European Synchrotron Radiation Facility in Grenoble, France used inelastic scattering, instead of transmission of x-rays, to solve this problem.

The technique involves passing a slicing x-ray beam down the length of the sample, to detect how much radiation is scattered by the material. The team can then obtain two-dimensional slices, which can be pieced together to give a three-dimensional image, without any computational reconstruction.

Inelastic scattering provides information about the chemical environment a chemical is in without the need for soft x-rays. ’So now we have a technique which is sensitive to carbon, oxygen and other [light] elements but is not restricted to the surfaces of samples or very tiny samples,’ says author Simo Huotari. The technique has been used on samples 1mm to 1cm thick.

The team have already tested their technique on a sample containing both diamond and graphite. ’Graphite has sp2 carbon and diamond has sp3 carbon so we can differentiate them from the spectra of the sample,’ says Huotari.

The penetrating x-rays allow researchers to study in situ reactions in extreme environments, or in containers such as in batteries or fuel cells. ’It’s highly sensitive to chemical environments so you’re able to scan materials and see how the chemistry in them changes,’ says Christian Sternemann, an expert in inelastic x-ray scattering at the Technical University of Dortmund, Germany. ’The technique has great promise as a characterisation and analytical tool in many areas of chemistry and materials science,’ adds Neal Skipper, a professor of physics at University College London, UK.

With some optimisation, says Huotari, it could also be used on biological samples. ’At the moment the radiation dose that gets into the sample is slightly too large to use on biological specimens. We have measured flowers but they usually die in the end.’