Hydrogen storage targets out of reach

Slow progress in efforts to develop the 'hydrogen economy'

In the quest to find a material which stores enough hydrogen to safely power a car over long distances, the US Department of Energy’s targets have been touted as the ultimate goal: in practical terms, storing about 5kg of hydrogen in a space the size of a petrol tank.

But at two recent conferences, researchers in the field have now conceded that - barring research miracles - it will probably be impossible to meet the DOE’s oft-quoted developmental milestones for the hydrogen economy. 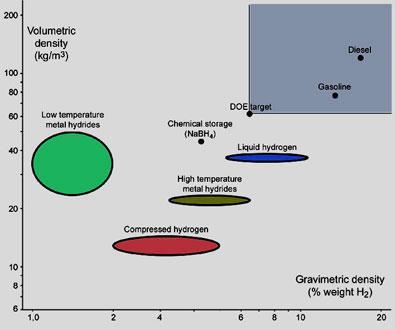 Matching the energy storage of hydrocarbons is proving tough

’I don’t think there’s a hope in hell of reaching the 2010 DOE targets,’ said Peter Hall, a chemical engineer at the University of Strathclyde, UK. Hall, who has gradually focused his efforts away from solid hydrogen storage, spoke to Chemistry World  at a special session on hydrogen storage at the ACS Fall meeting in Boston on 20 August.

’Right now we don’t see how these targets can be reached, and that is also the opinion of car manufacturers,’ agreed Ferdi Sch?th, who works with General Motors and Opel on hydrogen storage at the Max Planck Institute for coal research, in M?lheim, Germany.

Hydrogen storage materials for transport must be light, compact, and cheap enough to avoid making cars unbearably costly or uncomfortable. That means that the material - along with its tank and pipework - has to store a great enough percentage of its own weight in hydrogen at room temperature to send a conventional vehicle several hundred miles at a decent cruising speed. The DOE targets - six weight per cent by 2010, and nine per cent by 2015 - were meant to show how hydrogen could compete with petrol.

But researchers have tried stuffing hydrogen into porous solids, and binding it chemically in metal hydrides. They’ve tried more conventional pressurised gas or cryogenic liquid storage. All have hit serious problems, not least that hydrogen must be stored reversibly at temperatures conducive to the fuel cells the gas feeds (Chemistry World,  March 2006).

Even hydrogen enthusiasts are tempering optimism with realism. Oxford University’s Peter Edwards leads a ?1.75 million study searching through combinations of the lighter elements of the periodic table to find new materials that meet the DOE targets. At the RSC’s ’Future energy: Chemical solutions’ conference in Nottingham, UK, on 12 September, Edwards admitted: ’There may well not be this dream hydrogen storage material out there.’

But does it matter?

Failure to meet the DOE’s goals would be disappointing. But it might not matter. Phlegmatic engineers are already developing hydrogen-based transport with the storage materials at their disposal. The German navy now has four hydrogen-powered submarines, using a metal hydride storage system which is far too heavy for cars, but perfectly acceptable when it takes the place of a sub’s lead keel. 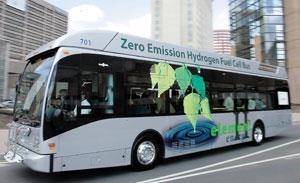 The hydrogen-powered bus: a breath of fresh air?

And hydrogen-fuelled buses are being trialled in many cities, using high-pressure gas cylinders to store the fuel. Since they return to the same depot to refuel every evening, there is no need to install a wide range of publicly-usable pumps. In principle, the same system could work in cars, but few investors will support their development while all public infrastructure is for liquid fuel.

To address this engineering problem, some chemists at the ACS meeting advocated storing hydrogen in liquids. Robert Crabtree, of Yale University, US, for instance, is developing organic liquids which release hydrogen catalytically - once dehydrogenated, he proposes that they would be removed at petrol stations for reprocessing, and the car filled up with a new load of hydrogenated liquid.

Even if the infrastructure problem could be solved, detractors point out that energy from hydrogen is hardly carbon-free, since at present the gas is produced using fossil fuels. However, the main difficulty is probably that liquid hydrocarbons are such excellent energy stores (see graph). ’As long as we are comfortable with petrol, it will be difficult to introduce hydrogen’ said Andreas Z?ttel, head of hydrogen and energy at the Swiss Federal Laboratories for Materials Testing and Research (EMPA), in Dubendorf. Hybrid electric cars look like the best way, at present, to break petrol’s stranglehold.

Despite this, the hydrogen storage hunt is far from over, said Z?ttel: ’The DOE targets are just a bad excuse for not entering the field.’ But constant talk of hydrogen breakthroughs round the corner - and a desire not to be unpopular - has helped politicians to ignore the urgency of addressing today’s transport pollution, commented Jeff Hardy, the Royal Society of Chemistry’s manager for environment, sustainability and energy. Understanding that the DOE’s appealing targets are likely to remain unmet could boost politicians’ appetites to press ahead with other measures such as ’limiting tail-pipe emissions, investing in cleaner technologies, forcing people to drive smaller engine cars, or limiting car numbers,’ he added.

It would be much simpler if we stopped trying to match future fuel economies to today’s standards, concluded Z?ttel. ’100 years ago nobody drove a car. I am convinced 100 years from now we will be happy with other modes of transport,’ he said.