Computer giant IBM is bringing its electronics expertise to biotechnology, and entering the race to map the human genome for less than $1000. Its plan is to build silicon chips with tiny holes - called nanopores - capable of pulling DNA strands through and reading their composition.

Developing a process to cheaply and quickly map the human genome would have far-reaching impacts on healthcare. At the tip of the iceberg, doctors would be able to identify likely health problems in advance and prescribe ’personalised’ medicine based on an individual’s DNA.

But human DNA is over three billion base pairs long - so creating an automated method that is both fast and accurate is a real challenge. Many groups are already working on new ideas, such as University of Oxford spin-out Oxford Nanopore in the UK, which is developing a protein-based approach.

’It’s interesting that IBM have decided to get involved in this field - but they are joining a race that has already started,’ says Jene Golovchenko at Harvard University, US, who is a technical advisor for Oxford Nanopore. ’Their idea of using nanopores is not a new one - but it is based on a solid-state system more suited to their background, rather than a biological one.’

IBM’s idea is to construct a ’DNA transistor’ - a microchip made from repeating layers of metal and insulator, with nanometre-sized holes punched in the surface. Electric fields can be cycled through the hole - gradually pulling DNA strands through base by base. By repeatedly stopping and starting the electric fields, they hope to read off the genetic code. 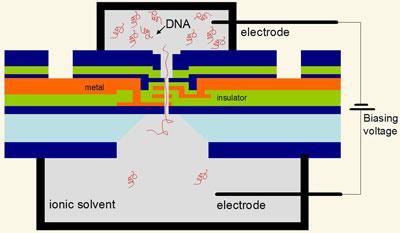 Set up of the nanoscale DNA sequencer

The ambitious plan is led by Gustavo Stolovitzky at the Watson Research Center in New York, US, and supported by part of a $6 million (?3.7 million) grant from the US National Human Genome Research Institute. Stolovitzky says that although the idea is powerful, they are still at a very early stage of research and there are many challenges to overcome - such as ensuring that every hole is precisely the same size.

But some experts still question whether mapping the human genome for less than $1000 is even possible with current technology. ’I think there will be indications within the next few years, on whether the process is possible, and what the best approach might be,’ Golovchenko says.