A bill that could help more Indian academics commercialise their research is set to be passed by the country’s parliament in June.

Academic chemists have been behind some of India’s top companies including drug maker Dr Reddy’s Lab, leading agro chemicals producer Gharda Chemicals and top contract research company Avra Lab. Alla Venkata Rama Rao, for example, was director of the Indian Institute of Chemical Technology in Hyderabad before he set up Avra in 1995 and Keki Gharda started his company in 1965 after teaching at the Mumbai University Institute of Chemical Technology.

But such examples are rare, thanks in part to rules that have prohibited government-funded researchers from starting businesses. Indian academics have also faced increasing pressure to publish and with some chemists able to earn over a million rupees (?12,500) a year by consulting for industry, few have wanted to take the risky step of setting up their own companies. Venture capital to help these firms to grow has also been in short supply.

That all may now be about to change. The new legislation will for the first time allow university researchers to own intellectual property - and keep their jobs while they establish their spin-outs. The Indian bill is modelled on the 1980 US Bayh-Dole Act, which is credited with kick-starting the country’s biotechnology industry.

Indian chemists have welcomed the new bill. In the past, some of India’s most prestigious universities have had to resort to complicated administrative tricks to work around the old rules.

Bhyravadhotilya Jayaram, head of the chemistry department at the Indian Institute of Technology in Delhi, recently helped his student and two former IIT scientists to spin-out Lead Invent Technologies - a start-up that uses computer modelling and protein structure prediction to discover new drugs. Because he was only involved in the company as an adviser, Jayaram was able to keep his IIT post. But his colleagues had to leave the university to set up the firm. The new rules will ensure that is no longer necessary. ’It will indeed be helpful in taking university research to the market,’ he says. 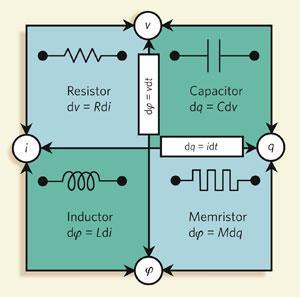 The memristor is the fourth basic circuit element, with memristance, M, defined as the rate of change of flux with charge

When Chandrasekhar Nair, a chemical engineer at the Indian Institute of Science (IISc) in Bangalore, founded Bigtec in 2006 he had help from the Society for Innovative Development - an organisation set up by IISc to help nurture university spin-outs.

With eight patents in the pipeline, Bigtec is now ready to license its first product: a palm size device that can detect the Hepatitis C virus in minutes instead of hours.

While some of India’s biggest universities Indian Institute of Technology (IIT) in Delhi were able to follow the IISc lead, most didn’t have the necessary time or resources required. The June bill should allow more universities to help their researchers to commercialise their work, Nair believes. ’This is a great opportunity for [academics],’ he says.

The new law is also underpinned by year on year increases to the science budget and recent efforts to improve patent protection for new drugs.

At 0.8 per cent of GDP, Indian science spending still lags behind China and most OECD countries. But this year’s budget of 242 billion rupees (?3 billion) is a fifth higher than the 2007 budget, which was also a fifth higher than science spending in the previous year. Even small colleges can now expect to receive up to two million rupees to improve infrastructure such as labs and teaching facilities.

’Today an assistant professor can ask for 10 million rupees for research and committees are willing to consider the request,’ says Thalappil Pradeep a chemistry professor at IIT Madras who has just launched a firm that will use proprietary nanotechnology to purify water. ’Money is not a deterrent anymore.’

Meanwhile, rules introduced in 2005 that prevented local drug firms from copying and producing patented drugs have forced some to invest more heavily in research.

’Adoption of [this] product patents regime . has created a huge demand for organic chemists,’ says Goverdhan Mehta, renowned chemist and former director of theIISc in Bangalore.  And while the pharmaceutical industry has gone on a hiring spree, the promise of better patent protection has encouraged more chemists to set up their own drug discovery firms, Mehta says.

More cash is also now on hand to help such firms to thrive. India’s science ministry established a Pharmaceutical Research and Development Support Fund with an initial investment of 1.5 billion rupees. The interest on that cash in now being used to support start-ups.

And there are further efforts to boost university technology transfer on the way. The government next plans to fund business incubators in every major university to help nurture academic spin-outs.