Light activated reactions of organic molecules in fatty acid membranes offers a plausible method for energy transfer and storage in prebiotic systems, claim US scientists. Could this help to explain how life began?

We don’t know how early cells were formed. One theory among many is that the first cell like structures were made through the self-assembly of fatty acids to form vesicles - membrane-enclosed sacks that can store or transport substances. However, this hypothesis leaves many questions unanswered, including how these vesicles harness energy for chemical reactions - an essential step for creating more complex systems.

To find the answer, James Boncella at the Los Alamos National Laboratory and colleagues have made vesicles and used them to mimic a possible primitive energy transduction (energy transfer) mechanism. They found that photocatalytic reactions - where catalysts are activated by light - involving polycyclic aromatic hydrocarbons (PAH) trapped in the vesicle membrane can capture and store energy from the sun. However, as Boncella points out: ’you can’t prove that it happened, all you can do is prove that it’s plausible.’ 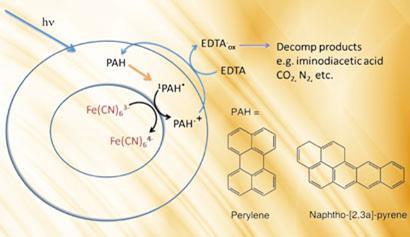 The team made vesicles from a hydrophobic - water-hating - membrane of fatty acids and PAHs surrounding a void containing metal anions. In a series of chemical reactions, electrons were transferred across the membrane and trapped by the charged molecules in the void. The PAH acted as a photocatalyst to reduce the metal anions. It was then regenerated by the oxidising  molecules outside the cell, which act as an electron source. ost chemical reactions involve two electron processes,’ he says.

To create the vesicles, the team used a complex mixture of short chain fatty acids and PAHs based on carbonaceous meteorite compositions to try to mimic the environment on the primordial earth.

Sheref Mansy, an expert in prebiotic chemistry at the University of Trento, Italy, agrees that creating vesicles from a complex mixture is more realistic. ’Life probably emerged from conditions that were a bit messy,’ he says. ’The work of the Boncella group and others suggests that we should simulate this messiness by using more complex chemical mixtures to better understand the prebiotic paths to life.’

’There is still much to learn,’ says David Deamer, an expert in biomolecular self-assembly at the University of California Santa Cruz, US, ’but I think the results offer a clue to resolving a major question about the earliest forms of life: which compounds could jump start a primitive version of photosynthesis?’