In a setup resembling traditional Korean doors, scientists from Korea have made dye-sensitised solar cells (DSSCs) that are bendy enough to be rolled around a pen and twisted, while maintaining their energy conversion efficiency at 90% of that of the flat form. Bendable DSSCs have potential applications in commercial advertising and small portable power sources.

Current DSSCs are built up of layers in a sandwich-type structure. They consist of two expensive transparent conductive oxide (TCO)-coated substrates with a spacer inserted between them to provide space for an electrolyte. Unfortunately, they are not very flexible because bending causes a strain on the two electrodes as they are bent in opposite directions - one substrate is under compressive strain and the other is under tensile strain. This causes the substrates to detach from the spacer. 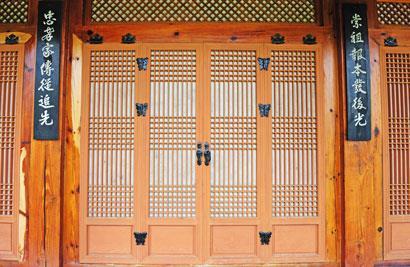 To circumvent this problem, Seung Cha and his team from the Korea Electrotechnology Research Institute, Boolmosangil, have bonded all the DSSC components to glass paper, forming a structure similar to Korean doors. ’The traditional Korean door is a beautiful and interesting internal door that consists of a wooden frame and traditional paper called "Hanji",’ says Cha. ’Hanji is very strong and can keep out the wind. At the same time, some light can penetrate the Hanji, creating good mood lighting in a living room.’

First, the team attached a stainless steel mesh to one side of a sheet of glass paper. ’The metal mesh acts as the wooden frame and the glass paper acts as the Hanji,’ explains Cha. Then, they deposited platinum - the electrochemical catalyst and conductor - on the other side. They deposited a TiO2 photoelectrode onto the mesh and filled the pores in the glass paper with the electrolyte. ’The structure is flexible, and expensive and fragile TCO films are not required,’ says Cha.

Tests on the team’s DSSC showed that it had an energy conversion efficiency of 2%. Cha admits that the 2% efficiency is not high compared to current DSSC systems and that an efficiency of 5% is needed for commercial applications. DSSCs with glass substrates have shown efficiencies of more than 10% and flexible DSSCs using TCO film coated plastic substrates have efficiencies of more than 5%. ’However, our structured cell can be rolled around a pen and this degree of flexibility has not reported before,’ he says.

Cha’s team is working towards increasing the efficiency and he expects that they can achieve 4-5% efficiency with their concept in time.

’As the cost of depositing the semiconductor in solar cells has dropped significantly in recent years, attention is shifting to reducing the cost of the substrate and electrodes,’ says Michael McGehee, an expert in DSSCs from Stanford University, US. ’Using paper, instead of conventional substrate materials like glass, metal or plastic, is very attractive, but has proven to be difficult because paper is rough. The authors have come up with a very clever design for making dye-sensitised solar cells with glass paper that allows the electrolyte to go right through the paper. Their approach could lead to substantially cheaper solar cells.’