Lasers on the energy ski slope

Lasers, like catalysts, shift energy landscapes during a chemical reaction.

Canadian researchers have shown that intense laser-light pulses can act as catalysts, controlling the end products of a chemical reaction without themselves being absorbed.

Albert Stolow and colleagues from the National Research Council’s Steacie Institute for Molecular Sciences, Ottawa, steered the outcome of a simple chemical reaction, the breakup of the gas molecule iodine bromide, with an infrared laser pulse. Depending on the pulse timing, they could choose their reaction products to be either an iodine and bromine atom, or an iodine atom and a bromine atom in an excited state.

For some decades, chemists have used intense laser light to bend and break molecular bonds. But this case is somewhat different, Stolow claims. The laser’s frequency was chosen deliberately to leave bonds unaffected; the molecule was already falling apart due to an earlier light pulse. Instead, the laser’s strong electric field altered the energy barriers the molecule had to traverse on its path to the end of the reaction - in turn deciding which products were formed.

Taking the analogy of molecules ’skiing’ down a hill or energy landscape on their way to reaction products, the laser’s electric field temporarily changed the slopes of the hill to tilt the molecule towards a different product - just as conventional chemical catalysts do, Stolow explained. This interaction of electric field with the molecule’s energy barriers is called the dynamic Stark effect. 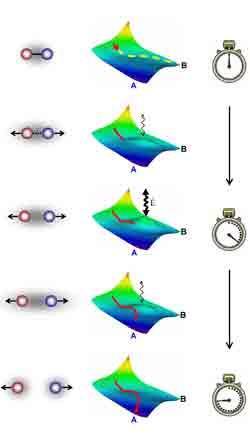 From the top: a molecule ’skiing’ down an energy landscape as it breaks apart would normally produce the products at point B. But applying a laser’s electric field (wiggly black arrow) halfway through a reaction alters energy barriers, forcing the molecule to ski to products at point A.

The effect has probably occurred before, but it could never be definitively confirmed. When lasers physically break up molecules by ionisation or fragmentation, the strong electric fields present should also shift energy landscapes during the reaction, like a catalyst. But this is impossible to detect amongst a myriad of other laser-induced reactions. By ensuring that no laser light was absorbed in their experiment, Stolow’s team clearly demonstrated the catalytic influence of the laser’s electric field.

Especially interesting, comments Robert Levis of Temple University, California, is that the researchers could calculate exactly how the laser would affect the IBr molecule before the experiment began. Previous research using lasers to break molecules relied on an evolutionary approach to find a laser pulse with the right frequency and intensity variations to give the desired products. It was too complicated to calculate beforehand what the laser would do.

’They picked a neat system - just simple enough to calculate the Stark shifts, and just complicated enough to be interesting,’ said Levis.

From these simple beginnings, the researchers hope eventually to guide reactions of far more complicated molecules, like proteins and RNA. As the laser’s frequency doesn’t matter - so long as it isn’t absorbed by the molecule - any kind of laser can be used, from IR to microwave. Stolow says the team is looking to influence condensed phase (liquid) reactions with electric fields, though they will have to ensure that the solvent won’t absorb the laser light used.