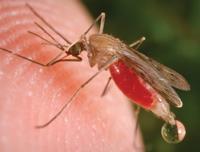 ’We teamed up with our Electronics and Computer Science people, and Reading’s Chemistry Department to set up the Schools Malaria Project website [emalaria.soton.ac.uk],’ explained Jeremy Frey from the University of Southampton’s School of Chemistry.

’School students coming onto the site will get detailed information about the disease,’ he said. ’Then they can go on to manipulate the same computer-aided chemistry design tools the major pharmaceutical companies use when they are looking for new disease-busting drugs.’ Frey even says it is just feasible that some lucky student might stumble across a new malaria-beating molecule.

Malaria kills over a million people a year, and a child every 30 seconds. The disease is limited to the world’s poorer areas with suitable climates - sub-Saharan Africa, south and east Asia, and parts of central and south America - with almost 500 million cases of malaria in Africa alone. Malaria has an impact on world health second only to TB, and has now developed drug and insecticide resistance. ’But there’s no money to be made by the pharmaceutical industry from new anti-malaria drugs,’ said Frey.

The situation is compounded by failing initiatives, such as the Roll Back Malaria partnership; a disparate international alliance of over 90 organisations charged with coordinating a renewed campaign against the pandemic. Since the partnership’s inception in 2000, malaria rates have increased.

The increase is attributed to drug resistance in the Plasmodium parasite that causes the disease, insecticide resistance in the mosquito vector, political and social upheaval, environmental changes, and budget restraints on malaria control programmes.

Frey is not expecting Hampshire’s school pupils to come riding to the rescue. ’This website is mainly a teaching aid aligned with current school chemistry curricula, and designed to stimulate and maintain students’ interest in the subject,’ said Frey. ’But you never know: while exercising their imaginations about molecular shapes and their importance in drug action and design, some bright spark might come up with something interesting!’

Daniel Nelson, media relations consultant with the Healthlink International malaria project, worries that the language used on the website might be a problem, but Frey and colleagues say they are working on this. The response from chemistry teachers has been positive.

’This type of exercise has never been available to school students before,’ said Frey. ’We need urgently to change the poor impression young people have of science and technology, not only for the sake of the UK’s science and technology base, but to also safeguard the future health of the world.’ Lionel Milgrom