Scientists in the US have massively extended the lifetime of lipid membranes, with potential implications for the pharmaceutical industry and the detection of pathogens and chemical warfare agents.

Craig Aspinwall, Scott Saavedra and co-workers from the University of Arizona, Tuscon, have found that polymerising synthetic lipids can increase the lifetime of suspended phospholipid bilayers - also known as black lipid membranes (BLMs) - from a matter of hours to three weeks.

These types of membranes have historically been used to study the activity of natural ion channels. More recently they have found use as sensors. Up to now, however, the instability of the membranes has limited their use. ’By stabilising the membrane you open up the number of applications,’ explains Aspinwall.

Drug screening for large pharmaceutical companies is likely to be the main application, with lots of small molecules screened against the long-lasting membranes to see if they activate the ion channels embedded within them. ’Ion channels are important therapeutic targets in a whole host of different diseases such as diabetes and Alzheimer’s,’ explains Saavedra. As many different types of ion channels could theoretically be imbedded in the membranes, the team also hopes to use them to detect pathogens and chemical warfare agents, adds Aspinwall.

BLMs made from natural lipids are generally very unstable, lasting only a few hours or a day at most. The BLM developed by the University of Arizona team improves on this significantly: ’Our membranes are stable in excess of three weeks,’ says Aspinwall ’and we maintain ion channel function in these membranes in excess of one week’.

To make these membranes, the team dissolves a synthetic lipid with polymerisable functionalities and literally paints it across a hole in a pipette. This is then immersed in water, and a bilayer spontaneously forms across the hole. Protein subunits that form the ion channels are then injected into the aqueous solution on one side of the membrane. These absorb on the surface of the lipid bilayer and then spontaneously self-assemble to form a pore. Once the ion channels are in place, UV light is used to polymerise - or cross link - the lipids. 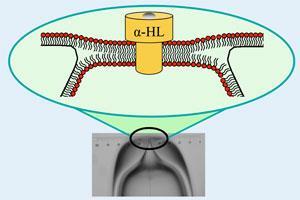 Previous groups have looked at using polymerised membranes, explains Saavedra, but they did not see increased stability because they used lipids that formed a stiff membrane. ’We are using poly(diene) phospholipids, so when you polymerise them they form a more rubber-like flexible material,’ says Saavedra. ’This is a key aspect of why it works.’

Having so far only tested their membranes using the

-hemolysin channel (the workhorse of the ion pore community) Aspinwall and Saavedra stress that their work is at an early stage. ’We need to do quite a lot of work to optimise the membrane composition,’ Aspinwall says. ’These are the first few experiments, and it worked tremendously,’ says Saavedra. ’It can only get better.’ 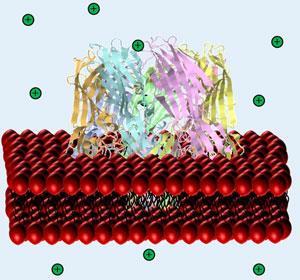 Paul Cremer, an expert in phospholipid membranes from Texas A&M University in the US, is equally enthusiastic about the work. ’The ability to make BLMs stable for three weeks is a clear breakthrough. One of the biggest practical problems with measurements to date has been the lack of stability of the phospholipid bilayer’ he says, adding that the work is likely to find applications in rugged sensor design.

Another expert in this field, George Gokel from the University of Missouri - St Louis, US, says the extended stability the Arizona team has achieved in the membranes is ’dramatic’. ’They have demonstrated very robust bilayer formation, and they have done a good control experiment with hemolysin,’ says Gokel. He suggests the next move will be to look at more delicate pore formers, to assess whether the polymerisation causes any unwanted interactions with smaller pores that are likely to be important in the drugs of the future.

Hagan Bayley, from the University of Oxford, UK, works on modifying

-hemolysin pores and says that the work is ’a definite improvement over efforts going back as long as thirty years to make polymerised bilayers that, like biological membranes, are well-sealed.’

’The currents are noisy and the pores appear to be opening and closing spontaneously (which is not expected),’ he says, ’but nonetheless this appears to be the first clear-cut example of a pore functioning in a bilayer stabilised by lipid polymerisation’.

The Arizona team now plans to focus on ion channels that are more relevant for diseases, says Saavedra. ’We are particularly interested in the ATP [adenosine tri-phosphate]-sensitive potassium channel, as a number of commercially available treatments for type 2 diabetes target this channel,’ adds  Aspinwall.