A polymeric matrix of cells, which can be opened and closed individually, could bring personal ’smell-o-vision’ a step closer to reality.

Virtual reality experiences are becoming more and more realistic thanks to both audio and visual advancements. Smell-o-vision, as it’s often called, can enhance these experiences, by releasing odours to match visual clues. However, attempts to create it often fail to impress due to a narrow range of smells that can only be deployed once.

Now, researchers at the University of California, San Diego, US, and Samsung in Korea, think they have found a solution. They used the polymer polydimethylsiloxane (PDMS) to create a square matrix of cells, which can each hold a different fragrance. The scientists then used heat to release an odour from a cell on cue. 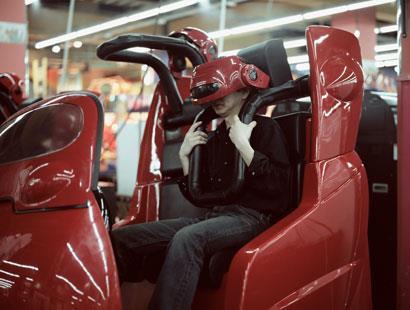 ’We wanted to be one of the pioneers to demonstrate that the sense of smell - odours - can be generated on command,’ says Sungho Jin at the University of California, San Diego. The team placed a set of heated elements both horizontally and vertically under the cells to control whether each cell was open or closed. A cell only opens if both its horizontal and vertical elements are switched on - the heat causes the polymer to expand and the odour escapes through a puncture hole.

’In the past other people have used a single reservoir of some smell and tried to activate it, but in real life we are dealing with thousands of smells,’ says Jin. The matrix system enables the researchers to use and control thousands of different cells relatively simply. For example a square of 10,000 cells - which can hold 10,000 different odours - needs only 200 controllers.

Takamichi Nakamoto, who combines odours with technology at the Tokyo Institute of Technology, Japan, is impressed with the matrix system. ’The basic principle of heating PDMS to release and stop an odour is not new,’ he says. ’[However], with a matrix many kinds of smells can be emitted, so [if the work] is realised it would be very interesting.’

The system can be used with cells ranging in size from nanometres through to micrometres, and shows no signs of leakage over a couple of days. The work is currently proof of concept, but the researchers say they could potentially develop the system for use in TVs or phones to enhance virtual reality experiences.