Man with a mission

At an age when many scientists have either retired or are content to mark time until they do, biochemist Ernst-Ludwig Winnacker left Germany for Brussels to take on fresh challenges as secretary-general of the newly formed European Research Council. His first hurdle at the ERC, created by the European Commission as the first pan-European research funding body, came on 2 January 2007 when Winnacker walked into his office for his first day on the job. 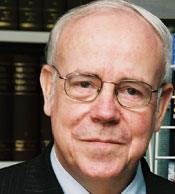 ’There was no PC, no telephone,’ says Winnacker, 65. ’There was a desk, but nothing else.’ Not exactly what he had been used to during the previous nine years as president of the German Research Foundation, Germany’s main research funding body. But while he admits that it won’t be easy, he relishes the idea of starting from scratch with the ERC.

Vision thing
Winnacker’s mission is to organise the infrastructure and manage the day-to-day operations of the ERC, which will disburse

7.5 billion over the next seven years to fund primarily basic research in 20 fields throughout the European Union. As secretary-general, Winnacker is less visible than ERC President Fotis Kafatos, the official public representative of the ERC and also chairman of the ERC’s 22-member Scientific Council. But although ERC guidelines charge the secretary-general with monitoring ’the effective and sound implementation of the Scientific Council’s strategy and positions’, Winnacker admits to having some ideas of his own about strategy that were developed during his long tenure as DFG head.

At the DFG, Winnacker promoted ’early independence of young scientists’, and increased interactions of German scientists and scientific organizations with colleagues around the world. During his stewardship, the DFG opened offices in Beijing, Washington DC, Moscow and New Delhi. ’Europe is fragmented,’ he says. ’This fragmentation must be overcome. It is one of our biggest weaknesses.’

Winnacker believes that in the past, the fragmented nature of the EU has sheltered scientists from the sort of intense competition for funding found in the US. ’Today, the competition is between scientists in Manchester and Liverpool or Ghent and Antwerp or Vienna and Salzburg,’ he says. ’Competition is a prerequisite for excellence.’

’And with the ERC, for the first time, there is the element of competition at the European level,’ he adds.

Flower power
Winnacker, born in Frankfurt, earned his doctorate in chemistry in Zurich, before doing post-doctoral work from 1968-72 in Stockholm and at the University of California-Berkeley. At the time, Berkeley was a major centre of the hippie counter-culture and opposition to the Vietnam War. ’We lived in the middle of it,’ he recalls. ’But our flowers died all the time. Flowers don’t like tear gas.’

After returning to a position at the University of Cologne, he moved to the University of Munich, moving up the ladder to become director of the Laboratory of Molecular Biology. He still retains a professorship there. ’Chemistry now is very different from the type of pure chemistry we studied years ago,’ he says. ’When I was a student, it was important, for example, to study the asymmetric centre. The best chemists today are studying things like molecular DNA or material science.’ Winnacker admits that if he were 30 years old today, he would be studying neurobiology or astrophysics. ’In chemistry, everything has been discovered,’ he says, before correcting himself. ’Well, not everything. But lots of it. The human brain and the expanding universe are among the most complex issues.’

Talent contest
Winnacker believes that Europe’s full potential in science has not been realised in part because of unequal distribution of research funding. While some nations, such as the UK, Germany and the Netherlands, provide solid funding support for their scientists, other nations, particularly new member nations in eastern Europe, are not nearly so generous. ’I think the talent is spread evenly in Europe,’ he says. ’But the best scientists in Europe are not always supported. The ERC will be advocates of good scientists everywhere.’

Scientific excellence will be the sole criterion for funding decisions, Winnacker emphasises, adding that the mandate from the European Commission ensures that the ERC will be immune from the meddlesome fingers of politicians trying to wrangle money for their home country.

Under ERC bylaws, secretary-generals are to be appointed for 5-year terms. But as is sometimes the case in newly formed EU institutions, the first term of secretary-general was divided, with Winnacker to serve the first half of the term and with Spanish economics professor Andreu Mas-Colell to take over in July 2009 to fill the remaining 2.5 years.

Winnacker believes that despite this, he still has enough time to nurture the ERC to full functionality. ’If it is not working in two and a half years, then it will never be working. I hope I can hand it over to [Mas-Colell] in good shape.’