Chemical membranes that can capture the carbon dioxide emitted by fossil fuels have been developed by US scientists, who say that they are substantially more efficient than conventional membranes.

Carbon capture and storage is just one way to limit the output of greenhouse gases into the atmosphere. Once separated, the gas can be pumped into long-term storage underground, and various pilot plants around the world are already testing the technique. 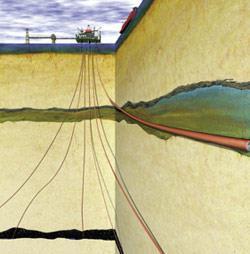 David Luebke and colleagues at the National Energy Technology Laboratory in Pittsburgh, Pennsylvania, have found that thin membranes of aluminium oxide (alumina) modified with chemical groups called trichlorosilanes were significantly better at removing CO2 from a mixture of gases than alumina alone.

The hybrid membranes remove CO2 by surface diffusion, where certain molecules are more strongly attracted to the surface than smaller, lighter molecules. This drags CO2  through the pores of the membrane, before ultimately being piped away. Luebke’s group found that their membrane could selectively remove CO2 from a mixture with helium, an inert surrogate for hydrogen.

The membranes could be used in integrated gasification combined cycle (IGCC) power generating systems, where coal is used to generate a stream of carbon monoxide and hydrogen, known as syngas. Waste heat from burning the syngas in a gas turbine is exploited to generate more electricity in a conventional steam turbine, thus boosting efficiency.

But up to 32 per cent of the molecules in syngas may actually be carbon dioxide, and Luebke’s membrane technology is intended to remove as much of that gas as possible, while leaving hydrogen and carbon monoxide behind.

Hybrid membranes are at least five years away from being commercially useful in this setting, said Colin Snape of the University of Nottingham, UK. There are a number of ways to capture CO2, he said, none of which are cheap. Hundreds of square metres of membranes would be needed in an IGCC plant for them to be useful, he said.

Luebke concedes there are difficulties ahead: ’Although the high permeance of the membranes is attractive, none of the samples approached the selectivity deemed necessary to be competitive as a CO2 capture technology for IGCC processes.’ But the team hope that adding more silane groups could increase the amounts of carbon dioxide they take up.