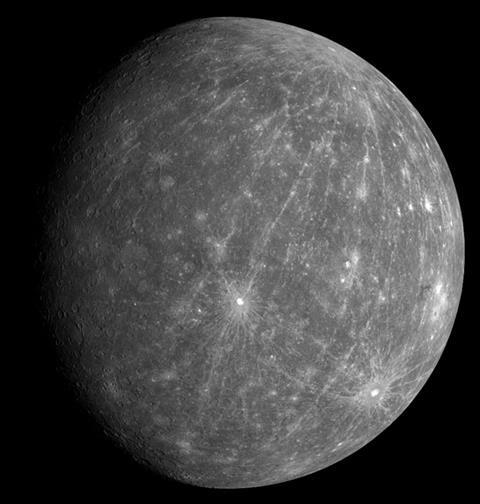 Mercury as seen by the Messenger probe. Signs of water and organic material have now been picked up

Nasa’s Messenger spacecraft has uncovered evidence that not only does water ice exist on the surface of the planet Mercury, but in many places this ice appears to be covered in a 10cm-thick layer of soot-like organicmaterial.1,2 Although the discovery of water ice on the closest planet to the sun was not entirely unexpected, the discovery of organic material was and suggests that some interesting chemistry might be taking place on the planet’s inhospitable surface.

Radar observations of Mercury from Earth had already detected bright, highly reflective regions at the planet’s poles, which astronomers thought could well be water ice originally brought by comets. Orbiting at a distance of just 36 million miles from the sun, compared with Earth’s 93 million miles, Mercury’s daytime surface temperature can reach 400°C. In permanent shadows within craters at the planet’s poles, however, the temperature probably doesn’t rise much above -170°C, allowing water ice to exist more or less indefinitely.3

Confirming whether water ice exists on Mercury’ surface is one of the main objectives of Nasa’s Messenger (MErcury Surface, Space ENvironment, GEochemistry and Ranging) spacecraft, which was launched in 2004 and went into orbit around the planet in 2011. To this end, its suite of analytical instruments includes the Mercury Laser Altimeter (MLA) and a neutron spectrometer. The MLA can indicate the presence of ice based on its reflection of near-infrared light, while the neutron spectrometer can detect the hydrogen in ice based on the effect it has on the energy level of neutrons blasted off the surface of Mercury by cosmic rays.

In a trio of papers, a group of US and French scientists now report their analysis of the data generated by the MLA and the neutron spectrometer, which reveals that the situation on Mercury is actually more complicated than originally supposed.

The neutron spectrometer was unable to resolve individual bright and dark regions. Overall, however, its data indicated the existence of a thick, hydrogen-rich material covered in a thin, less hydrogen-rich layer around Mercury’s north pole.

Putting these data together, the scientists conclude that the bright regions are pure water ice, while the dark regions consist of water ice covered in a 10cm-thick layer of organic material. This explains why the dark regions are found at warmer latitudes, because the organic material provides a thermal blanket that prevents the ice from subliming. At higher latitudes, however, it’s cold enough in the craters for ice to exist without such a blanket.

‘MLA's discovery of dark material in those permanently shadowed craters was a big surprise,’ group member David Paige at the University of California, Los Angeles, tells Chemistry World. ‘We had expected that Mercury's subsurface ice deposits were covered by regular Mercury soil, but when this material turned out to be extremely dark, then it got us thinking about what it could possibly be.’

The scientists think that the water and organic material were originally delivered to Mercury’s surface by comets, with both eventually migrating to the cold polar regions where they persisted in craters. Here, powered by high-energy particles in the solar wind, carbon- and nitrogen-containing molecules in the ice undergo chemical reactions, producing increasingly complex, polymer-like organic compounds that form an insulating layer on top of the ice. Determining the precise chemical composition of this layer will require future missions to Mercury, says Paige.

Mark Sephton, professor of organic geochemistry and meteorites at Imperial College London, UK, says the finding of water and organic material on Mercury is ‘an exciting development’ with some important implications for both planetary development and the origin of life. ‘The recognition that planetary surfaces can accumulate volatile materials has implications for theories of how atmospheres and oceans can be formed,’ he explains. ‘Moreover, evidence of a relatively passive surface preserving layers of primitive materials suggests the potential for planetary and lunar records of solar system evolution. Lastly, the presence of organic matter and water reminds us that the raw materials of life are efficiently delivered to many planetary surfaces in the solar system.’