Chemists find the final piece to a 70-year-old puzzle

After 70 years of research, the definitive structure of a key compound in the plant-destroying Phytophthora pathogen has finally been revealed [1]. Unmasking ’hormone alpha1’, as the compound is known, should provide new insights into protecting crops and other plants against this virulent group of moulds.

Best known for causing the Irish potato famine in the late 1840s, Phytophthora moulds are responsible for widespread economic damage, including Sudden Oak Death, a disease that has  devastated US oak tree populations in California and Oregon. Although the effects on crops are mainly kept under control by fungicides, new fungicide-resistant strains have started to emerge. 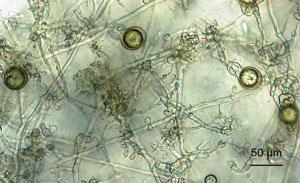 Hormone alpha1 is critical for inducing the formation of reproductive oospores

Studied for many years, it was reported as early as 1929 that a single, hormone-like compound regulated reproduction in all species of Phytophthora, but despite extensive studies, isolating and identifying this compound has been very difficult.

A breakthrough came in 2005, when a Japanese team led by Makoto Ojika successfully isolated 1.2mg of hormone alpha1 from two thousand litres of mould[2]. The researchers were able to learn much about the hormone’s structure, but were unable to deduce the stereochemistry at four key chiral centres - leaving a possibility of sixteen different isomers.

Now, three teams of scientists working in China and Japan have finally identified which of these isomers is the correct structure.   Through extensive NMR studies, they first whittled down the number of possible structures to four. Next, they synthesised all four of the possibilities and compared their bioactivity with that of the extracted hormone.

’We were very lucky that only one isomer exhibited hormonal activity,’ said Arata Yajima, who led the team at the Tokyo University of Agriculture. ’If the other isomers had exhibited the same activity, it would have been impossible to determine the absolute configuration of the natural product by this study.’ The Chinese research teams were led by Yong Qin at Sichuan University, Chengdu, and Jianhua Qi at Fudan University, Shanghai.

Howard Judelson has studied Phytophthora  extensively at the University of California-Riverside, US, and says he hopes Yajima’s findings will assist in controlling this dangerous pathogen. ’Phytophthora  infestans  causes billions of dollars of damage every year and is only barely kept in check with large amounts of crop protection chemicals,’ Judelson told Chemistry World. ’And that is just one of the many species.’

The researchers now plan to investigate which receptors in Phytophthora are triggered by the hormone. Developing chemicals that block these receptors, thus preventing the pathogen from reproducing, could have benefits across the globe.