By studying the DNA of an obscure subterranean rodent, scientists hope to uncover the genetic basis of cancer resistance. The recently published draft sequence of the naked mole-rat genome promises to reveal the secrets of its long and remarkably cancer-free existence, potentially providing new targets for anti-cancer drugs.

The naked mole-rat is unusual for several reasons. Besides its strange, some say ugly appearance - it has large, protruding teeth and wrinkly, furless skin - it lives many times longer than other rodents, reaching nearly 30 years, and barely ever succumbs to cancer. Yet its genetic neighbour, the mouse, is cancer-prone. 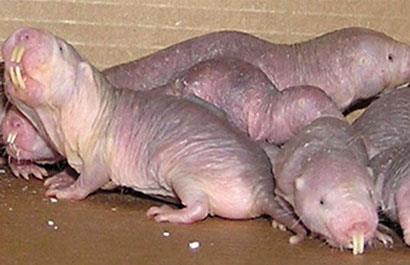 What is it that stops the naked mole-rat getting cancer? Studies have already implicated several genes and proteins in anti-cancer mechanisms, but without a full genome sequence, pinning them down was a laborious task. Now, UK scientists have produced a draft sequence of the animal’s genome1.

Mario Caccamo at the Genome Analysis Centre in Norwich explains that breakthroughs in sequencing technology in recent years allowed his team to complete the sequence in a matter of weeks. ’With these technologies we can sequence many fragments in parallel at a massive, massive scale - we are talking about millions and millions of sequences,’ he says. By contrast, the human genome took years to complete.

The data is already freely available to researchers looking to compare the naked mole-rat’s DNA to other, genetically similar, species. Caccamo says the differences may lie in tumour suppressor genes or in other regions of DNA that control how these genes are expressed.

Andrei Seluanov at the University of Rochester in New York was responsible for work in 2009 that identified two naked mole-rat genes - p16 and p27 - involved in halting cell divisions that could lead to tumours2. He says the draft sequence is a ’critical step’ and should help identify new drug targets. ’This was a big hurdle for us because we have pretty good candidates right now, but we didn’t have a sequence,’ says Seluanov. ’If you have a sequence you can easily compare it and if you find differences those could be potential targets.’

Caccamo notes that a few years back the same data would have been nowhere near as valuable because the mouse and other genome sequences weren’t available for comparison. ’Because we have so much data that has been generated for other species, we can really leverage that,’ he says.