The so-called polyketals are hydrophobic polymers with biodegradable ketal linkages in their backbone. They are synthesised by a polymerisation strategy based on the acetal exchange reaction, said Niren Murthy of the biomedical engineering department at Georgia Institute of Technology.

Polyketals form nanoparticles that can encapsulate either hydrophobic drugs or proteins. The polymers undergo acid-catalysed hydrolysis into low molecular weight hydrophilic compounds, said Murthy, who plans to use this feature to build a capsule that releases its therapeutic cargo directly in the low pH conditions inside target cells.

Polyketals have a particular advantage over current biodegradable polymers for drug delivery, such as polyesters, said Murthy. Those materials release acidic byproducts as they degrade in the body, he said, which can cause inflammation. Polyketals do not release inflammatory byproducts. ’This is where the driving force for the polyketals comes in,’ Murthy told the ACS national meeting. The synthesis of polyketals is also relatively simple, he said. 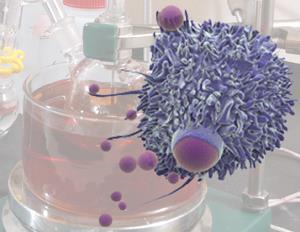 Murthy and collaborator Robert Pierce at the University of Rochester, US, are investigating two drugs - ebselen and catalase - that mop up antioxidants and could be used to treat acute liver failure. They have incorporated catalase - an endogenous enzyme that catalyses the decomposition of H2O2 to H2O and O2 - into polyketal nanoparticles, and shown that the enzyme does not have to leave the particle to become active.

Pierce responded to questions from fellow delegates, explaining that intravenous injected polyketal nanoparticles are designed to be taken up specifically by macrophages, not other cell types.

’It’s an untapped field,’ said Murthy, ’there are no delivery vehicles that target macrophages.’