Manganese oxide nanoparticles have been used as contrast agent for magnetic resonance imaging (MRI), allowing researchers to see inside living brains in the same detail as dissected tissue under a microscope.
The team, led by Taeghwan Hyeon of Seoul National University in South Korea, say that this is the first biocompatible nanoparticle MRI contrast agent - it is also effective for liver, kidney and spinal imaging.

MRI depends on the fact that water and fat account for approximately 63 per cent of the body’s hydrogen atoms. The proton in each hydrogen atom’s nucleus has a tiny magnetic moment which is forced to line up with or against an MRI scanner’s powerful magnetic field. Radio pulses of just the right frequency cause some protons to flip their spins, which can then relax back to their original state between pulses - the change in distribution of these magnetic moments forms the MRI signal. Contrast agents, injected into patients undergoing MRI, help to speed up this relaxation process. This in turn boosts the intensity of the MRI signal and helps to form much sharper images of tissue. 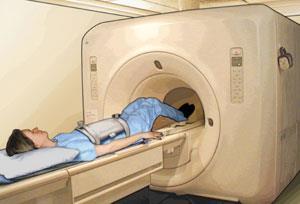 The Korean team’s solution was to prepare insoluble manganese oxide (MnO) nanoparticles and then encapsulating them in a biocompatible polyethyleneglycol-phospholipid shell. Their size could be controlled during preparation by adjusting the solvent or the reaction time, with smaller nanoparticles - around 25 nanometres across - giving brighter contrast.

They tested the nanoparticles by rapidly injecting them into a mouse’s tail, and subjecting it to an MRI scan 72 hours later. The images they saw were as clear as those usually obtained from dissection and histological examination. And by conjugating the MnO nanoparticles to a tumour-specific antibody, the Korean team could selectively target and image breast cancer cells in a metastatic brain tumour that had been implanted into another mouse. ’This new contrasting agent could have enormous potential in helping management and treatment of Alzheimer’s and Parkinson’s as well as metastatic brain diseases,’ says Hyeon.

’These new MnO nanoparticles could represent a very considerable advance in MRI, not only for early diagnosis of Parkinson’s disease and dementia-related conditions like Alzheimer’s disease, but also in investigating epilepsy,’ said Nick Sathananthan, medical Director of the Brentwood Diagnostic Centre in Essex UK. He added that the contrast agent may also help to obtain more reliable mammograms.
Lionel Milgrom