Early Neolithic Europeans couldn’t stomach their milk, according to the first direct examination of lactose intolerance in skeletons dating from 5840 to 5000 BC. The finding backs up the idea that dairy farming drove the rapid evolution of lactose tolerance, against the notion that such farming was only adopted in populations who could already digest milk. 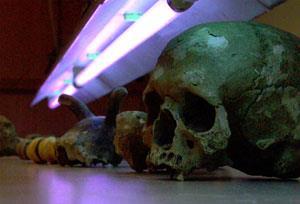 Show your bones: Neolithic remains were decontaminated with UV light

Ninety per cent of adult northern Europeans and some people from Africa and the Middle East now have a gene expressing lactase, the enzyme that hydrolyses the milk sugar lactose into its glucose and galactose monomers. But most humans lose their lactase enzyme after babyhood; lactose passes through their stomachs undigested, leading to stomach aches, bloating, diarrhoea, and excess gas production as bacteria chew the lactose up.

A host of studies examining our modern human genome have identified mutations affecting lactase expression, making it clear that lactose intolerance throughout adulthood was the norm before dairy farming became widespread in Europe. But it wasn’t quite clear whether a fortunate entire lactose tolerant population took up dairy farming, or if exposure to milk forced the evolution of lactose tolerance.

’It’s a simple chicken or egg question,’ explained Mark Thomas of University College London, UK. Together with Joachim Burger’s team from Mainz University, Germany, he has now pinned down this uncertainty. The researchers analysed the DNA of Neolithic skeletons from archaeological sites across Europe; such a study hadn’t been attempted before because of the difficulties of amplifying DNA from ancient samples and ensuring they were free from contamination.

The team found no evidence of the lactase gene version allowing modern Europeans to digest lactose as adults, suggesting that the Neolithic population wouldn’t have tolerated milk. This provides more direct confirmation of the perception that the cultural shift to dairy farming, which started about nine thousand years ago in Europe, drove lactose tolerance.

Those Europeans who could drink milk, rather than having to be content with eating cheese (fermented, and containing less lactose) would have enjoyed evolutionary benefits probably accounting for lactose tolerance’s rapid spread, said Thomas. In particular, milk was uncontaminated by parasites, unlike stream water, making it a safer drink.

The research isn’t the final word in our understanding of lactose tolerance, Thomas added: ’Next on the list is why there is such tricky disparity in lactose intolerance between populations. It’s striking, for example, that today around eighty per cent of southern Europeans cannot tolerate lactose even though the first dairy farmers in Europe probably lived in those areas. Through computer simulations and DNA testing we are beginning to get glimpses of the bigger early European picture,’ he said.