Questions remain over whether the phenomenon is merely an artifact 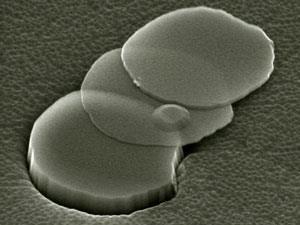 Against all expectations, superconductivity may be occurring at the interfaces of graphite flakes

Researchers in Germany have presented further evidence for room temperature superconductivity in regions of graphite samples. Other experts, however, remain cautious about the interpretation of the measurements. Meanwhile, a scientist in Japan has made the astonishing claim that he packed a ring-shaped container with octane-soaked graphite flakes and induced a current within the ring which persisted without decay for 50 days. But superconductivity specialists say that the paper is thin on experimental detail and the necessary checks haven’t been done.

Pablo Esquinazi at the University of Leipzig claimed last year that his team seemed to have caught glimpses of room temperature superconductivity in samples of graphite powder that had been mixed with water and dried.1 At the time other specialists in the field such as Ted Forgan of the University of Birmingham in the UK and Archie Campbell of Cambridge University in the UK counselled caution in the interpretation of the results.

Now, Esquinazi and colleagues have provided more evidence of what they say is the presence of superconducting regions at interfaces within graphite samples. In one series of experiments the team shows that when electrical contacts are made at the edges of interfaces in samples of highly oriented pyrolytic graphite (HOPG), at low enough temperatures and currents, electrical resistance disappears.2 ‘The whole behaviour is compatible with the existence of granular superconductivity located at the interfaces of those graphite samples,’ Esquinazi says. A second series of experiments measuring the magnetisation of HOPG samples with well-defined interfaces produces a hysteresis loop similar to that obtained with the water-treated samples.3 Bulk samples without interfaces did not show this behaviour. ‘Therefore the results in the earlier work do not appear to be an artefact of background subtraction,’ Esquinazi contends.

Forgan and Campbell remain to be convinced, however. Forgan’s colleague Elizabeth Blackburn asked two students to repeat the original experiment with water-treated graphite. ‘They were able to superficially reproduce the results of the original paper, but taking the correct background subtractions turned the “superconducting” effect into ferromagnetism from impurities, which is a much more likely source,’ Blackburn says. Forgan adds: ‘The HOPG paper may be subject to the same criticism and also shows an unexpected temperature-dependence in the hysteresis. My general feeling is that the case is far from proven.’

Campbell says that the new paper on magnetic measurements shows effects ‘that are very small and concealed within a large diamagnetic effect’. Campbell acknowledges that ‘these are clearly reputable physicists doing careful measurements but I am not convinced that they have proved superconductivity. To be fair they are also cautious. It is not easy to get unambiguous conclusions from isolated microscopic regions.’

Esquinazi acknowledges that background subtractions are important and that it is necessary to ensure that the containers used in the experiments are not a source of artefacts. ‘We have measured several plastic foils alone and their magnetic – ferromagnetic-like – response depends on the portion of the foil one selects. Therefore one needs to characterise that background properly. I guess the ferromagnetic-like signals are coming from the background, not the powder.’

Meanwhile, Yasushi Kawashima of Tokai University in Japan claims to have produced room-temperature superconductivity by soaking HOPG in n-heptane or n-octane, packing the flakes into a small hollow ring made from PTFE and inducing a current within the graphite.4 Kawashima says that the current did not decay for 50 days and that measurements showed that ‘the resistance of these samples decreases to less than the smallest resistance that can be measured with a high resolution digital voltmeter’. He concludes that the results ‘suggest that a room temperature superconductor may be obtained by bringing alkanes into contact with a graphite surface’.

‘To prove something like this one must do all possible checks,’ Forgan says. Several basic ones have not been carried out he adds. The apparent circulating current of around 6mA would be ‘surprisingly large arising from Josephson coupling of grains touching in a ring’. Forgan concludes: ‘I do not know what the cause of his results was, but I would not jump to the conclusion that it was superconductivity.’

Kawashima’s responds that this superconductivity is not a result of Josephson coupling, but rather arises from the abstraction of hydrogen atoms from the alkane by the graphite, which, says Kawashima, exhibits an ionic characteristic, and that resulting protons can ‘move freely on the graphite surface without activation energy’.

However, Campbell says the paper lacks important experimental detail and that while the results are inconsistent with any explanation other than persistent current in the ring, ‘I will not believe it until somebody else repeats the experiment.’

Esquinazi agrees that it is ‘very difficult to believe that such a simple method could work’, and that simple checks were apparently not carried out. Nonetheless, Esquinazi’s team is looking to reproduce the results. ‘First quick tests showed us there is something there.’ And Esquinazi warns: ‘If scientists reject a finding simply because they do not believe, then they should not complain if they always arrive late.’