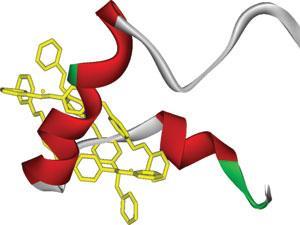 Alzheimer’s disease (AD) is the most common cause of dementia among the elderly and is estimated to affect over 35 million people worldwide, a figure which is expected to triple by 2050. One of the pathological hallmarks of the disease is the polymerisation of amyloid ß-peptides (Aß) into insoluble fibrous protein aggregates known as plaques. Scientists have been trying to develop inhibitors of Aß aggregation as a therapeutic and preventive strategy for AD treatment. Most reported Aß inhibitors are small organic molecules or peptides, many of which act non-specifically.

Xiaogang Qu and coworkers at the Changchun Institute of Applied Chemistry used a novel cell-based screening system, which relies on tagging Aß with a slow-folding fluorescent protein, to identify two metallo-supramolecular ‘cylinders’ that are able to inhibit Aß aggregation by targeting the central region of the peptide. These cylinders were found to resemble so-called zinc fingers, small protein structural motifs that typically bind one or more zinc ions and impart versatile binding to other proteins or DNA.

In addition, the complexes were found to destabilise pre-formed Aß plaques. ‘The inhibition effect is significant for preventing the development of AD symptoms at an early stage, while the destabilisation effect is of great benefit for reversing the progression of AD,’ says Qu.

‘Supramolecular chemistry has provided many outstanding insights into biological systems, so it is exciting to see this rich field expanded to include the areas of Aß aggregation and Alzheimer’s disease,’ remarks Zachary Mensinger at the Institute for Neurodegenerative Diseases, University of California, San Francisco, US.

In vivo studies in mice revealed that the complexes are capable of decreasing the level of insoluble Aß and alleviating spatial memory deficits, although Tim Storr at Simon Fraser University, Canada, notes that ‘it remains to be determined whether these cationic complexes cross the blood–brain barrier or are acting systemically’.